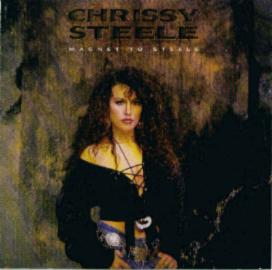 Production:
Produced and engineered by Brian “Too Loud” MacLeod.

Review:
Magnet To Steele is the debut effort from this Canadian native. Songs like “Love You ‘Til It Hurts”, “Move Over”, “Murder In The First Degree” and “Magnet To Steele” really rock hard. Of course there are your typical slower paced numbers in “Love Don’t Last Forever” and “Cry Myself To Sleep”.

Chrissy Steele‘s sound is very similar to another female Canadian vocalist, Darby Mills and the Headpins (with a touch of Lee Aaron for good measure), which only makes sense as this was originally slated to be a Headpins album. Magnet To Steele really was the brainchild of Headpins founder Brian MacLeod, who produced, played and wrote the vast majority of songs found here. Sadly this would be his final release, as MacLeod succumbed to cancer at the age 39. Steele is rumored to be working on another album in the future, but in the meantime I give this record two thumbs up!