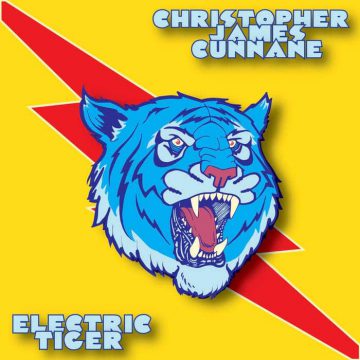 Review:
When a new release comes across my ears that sounds right up my alley, it’s always a cool thing and when it lands with enough of an air of familiarity that it causes me to dig deeper until I uncover a few unexpected surprises, even cooler. In this age of fast news and limitless information, it’s a rare treat to be pleasantly surprised but while setting up to give a look and listen to the debut solo album from guitarist Christopher James Cunnane (aka Starboy), the rockin’ revelations were a plenty.

Now at first crank, I just put off that familiarity to the bits of early ’70s glam rock and glitter influences clearly shaken all over the ten tracks on Cunnane‘s Electric Tiger but along the way, something about the tunes kept poking at me begging for a closer look. Sure, you can hear that T. Rex influence in a thousand cool bands but it’s not very often that something else pops out and grabs you with an almost déja vu-like tap and in this case, it turns out that I’ve been digging on Cunnane‘s guitar work since first stumbling across early Robin Black tracks online well before I even picked up the cool 2002 Intergalactic Rock Stars Planet Fame CD. Now here we are nearly 20 years on and turns out that Starboy has his own rockin’ solo platter and it happens to have slid across my screen. Yep, it’s definitely a small planet! These days, Black is an MMA trainer and motivational speaker but luckily some of his former glam mates are still on the scene including rock and roller/DJ Christopher James Cunnane.

Loaded with tons of Toronto musical talent including fellow Intergalactic Rock Stars, Ky Anto and Stacey Stray, Cunnane‘s first stab at solo rock and roll is a ten-tune album of solid old school glam rock that blends a T. Rex groove with Cunnane‘s own Starboy guitar style. The first couple vids from Electric Tiger offer proof of this two-sided combo with shuffle rocker “It’s Gonna Happen” coming out of the corner full on Marc Bolan before tagging in “What I Want (I Don’t Know)” for a well-placed Robin Black style tap out. Yeah, I know, the pun was intentional.

But that’s not to make it sound like Electric Tiger is merely a two-trick pony. Cunnane makes this mix work well from start to finish and while earlier glam style tracks like opener “Get Up (Get on My Side)”, “Takin’ Me Back In Time”, and “Do You Want It” all kind of have that Bolan shuffle thing going on, like T. Rex tunes, each has something on its own to make it worth a boogie listen. Toss it over to the other side and Cunnane picks up the diversity even more on the IRS leaning tracks like super cool rocking anthems “You Got It” and “Makes Me Wonder”, both being loaded with enough raw punk energy to make ’em as glam edgy as bubblegum sticky. Those two along with “What I Want (I Don’t Know)” for me are the true gems on Electric Tiger and mind you, I’m a full on T. Rex fanatic but man, turns out Cunnane just kills the most on that more recent glam side of his arsenal.

The odd tunes out are also some of the coolest. Heavy groove rockers “Twenty Feet of Love” and album closer “Over The Mountain” pull no punches on the heavier end but still fit Cunnane‘s glam rock style and are the kind of tracks the guys feel good enough to rock to and the gals sure enough to shake to. The only out of the box shame here is the ballad “Beautiful Girl”, a pretty song that delivers a mood so dreamy that the vocals end up completely lost. You can almost see where this one could have gone, which makes it even a bit tough to listen to. Not sure if this was the intention but the end result borders on invisible.

In addition to the cool songs and performances, perhaps the smoothest thing about Electric Tiger is the nearly mono sounding mix, which could be attributed to the tracks being recorded and mixed to tape as opposed to digital. It adds to an already cool old school rock and roll vibe that Howie Weinberg (Nirvana, Aerosmith) thankfully kept intact during the mastering process. If Cunnane intended for his first solo studio trip out of the gate to be a raw, rock and roll one, well, he succeeded. Electric Tiger is a fun, raw, release full of intergalactic awesomeness and beautiful boogie bliss. Solid on the glam n’ glitter rock and roll end. Do you want it? Well cool cuz thanks to Christopher James Cunnane, you got it.

Christopher James Cunnane‘s “What I Want (I Don’t Know)” video: