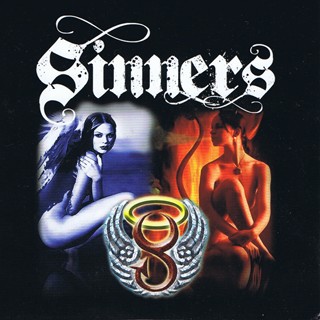 Review:
The latest band of rock ‘n’ roll outlaws — complete with a pissed-off attitude — to emerge upon the crowded hard rock music scene are the Cincinnati Sinners. Mixing the ‘take-it or leave-it’ outlook of The Four Horsemen with some Southern sounds make these newcomers one to keep an eye on in the near future.

The Cincinnati Sinners barrel through the six songs on their debut 6Pak EP with all the aggression of an ornery Frank C. Starr. After opening with the boot-stompin’ “Thunder”, the band show exactly what they are capable of on “Cold Pussy Strut” — a mean and obnoxious slab of hard rock that begins slowly before shifting into overdrive. The sense of rhythm the band displays on this track is something that most groups can only dream of recreating and conjures up images of Circus Of Power in their prime.

After destroying The Rolling Stones‘ “Its Only Rock N Roll” (in a good way), the Cincinnati Sinners take a Twisted Sister inspired turn during “Girls Cars Guitars And Rock N Roll” — out of nowhere vocalist Russell Jinkens (formerly of Prizoner and CJSS) does a pretty convincing impression of Dee Snider. After losing focus on the countrified “Big Sexxy”, the EP’s only miss, the foursome wrap things up with what will likely be a live staple in “Sinnerz Swing” — a track that comes across as a hard rock version of Anthrax‘s “I’m The Man”.

The Cincinnati Sinners are already in the studio working on new material, and I already picture it being better than the first because when you’re angry and mean (and totally look the part) only magic can result. In the case of the Cincinnati Sinners, when aggression and southern rock collide, be prepared for the onslaught… I can’t even begin to imagine how entertaining their live shows must be.