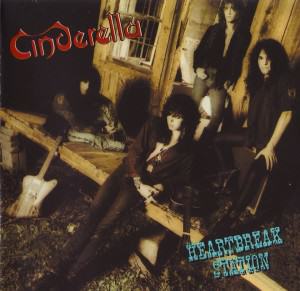 Review:
With the 25th anniversary of the release of Cinderella‘s Heartbreak Station, this seemed like a good time to revisit the group’s third studio album. As seems to be the case with a lot of older albums these days, I had not heard Heartbreak Station in at least 20 years. The only songs that I had heard from the album in the last 20 years were the ones that landed on Cinderella‘s first compilation album Once Upon A… and whichever songs that I had heard frontman Tom Keifer play live in the last year and a bit.

As it turns out, there was a reason why I had not heard Heartbreak Station in more than 20 years and it is simply because I viewed it as quite the disappointing follow up to Long Cold Winter back in the day and listening to it after all these years does not really alter my earlier views of the album. It still is a disappointing album compared to Night Songs and Long Cold Winter, which contained harder rocking songs and certainly less instruments than the pot pourri of instruments that can be found on Heartbreak Station. Unfortunately, Heartbreak Station saw Cinderella venture into more country bluesy territory with certain songs straying well into country territory such as “One For Rock And Roll” (which feels like anything but a rock and roll song) and slower bluesier tracks such as “Dead Man’s Road” and “Electric Love.”

I’ve always viewed the album Heartbreak Station as a two part record. The first four songs are all quite good despite the increase in instrumentation and certainly two of them — “Shelter Me” and “Heartbreak Station” — are still concert staples for Keifer and rightfully so. The rest of the album sees Cinderella take the foot off the gas pedal for far too long with the exception of “Make Your Own Way” which is a good rocking song. No offence to Keifer and company but aside from “Make My Own Way” and the first four tracks on Heartbreak Station, it feels like the album is full of filler material. Heartbreak Station closes with the rather boring ballad “Winds Of Change.” Sadly, after Heartbreak Station, I lost interest in the band and really only focused on the group’s first two records from that point in. This is also when the record sales started slipping for Cinderella and although Heartbreak Station still reached platinum success in the States, it was a far cry from the multi-platinum success of the group’s two prior albums.

Overall, I have viewed and still view Cinderella‘s Heartbreak Station as a disappointing album, although it is not quite as disappointing some twenty five years later as I had remembered it to be. If you compare Heartbreak Station to some of the music that is coming out today, it’s actually a decent record but when compared to Cinderella‘s prior records of Night Songs and Long Cold Winter, the album simply does not hold a candle to either one.