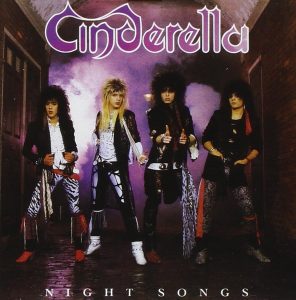 Review by Deke:
So our good pal Jon Bon Jovi supposedly discovered these guys, got them signed and hooked Cinderella up as the opening act on Bon Jovi‘s mega everything Slippery When Wet tour of 1986!

That my friends is called the winning ticket! It shot Night Songs up the charts which in turn made Cinderella become a headlining act after their very good follow-up to Night Songs, which was Long Cold Winter.

Tom Keifer (lead vocals, guitar, songwriter for everything), Jeff Labar (guitar), Eric Brittingham (bass) and drum guy Al Parker (who was replaced by Fred Coury who is pictured on the album cover but does not play on the record) round out Cinderella.

When I recently cued this album up on my iPod, to me their cover glam image didn’t dictate what was on the inside of Night Songs. Let me explain… Shake it… Don’t break it…

“Night Songs” — Bells a chiming and some heavy devy suped up slide guitaring from Keifer and Labar and it’s a real quick hit to the sonic noggin’! Keifer has a real unique rock voice unlike the other so-called bands of the times that have tailor-made radio friendly voices for the MTV’s of the world. Keifer to me sounds like Brian Johnson at times — like he’s gonna puke his lungs out from his screeching! Keifer makes vocal screeching seem real cool! “Night Songs” is a cool lead off track and more of a slower kinda plodding, not a good time syrupy “Talk Dirty To Me” like track! No siree, we are Cinderella… We are here to kick your ass! But before the ass kicking starts has anyone seen Keifer‘s scarf?

“Shake Me” — Yes, the song got these guys out there! The video had Keifer doing all the Steven Tyler moves ten years earlier (1976). Tyler had the scarfs hanging off the mic. Tyler wore the same kind of outfits. Keifer humps his mic stand just like Tyler did and still does to this day. So I guess the bottom line is if you’re gonna borrow someone’s vibe, borrow from one of the best (Tyler) Cinderella. Keifer does write a great track with a Aerosmith shmozzy boozey feel and you can hear a ramped up Hammond b3 in the background. “Shake Me” with its ’80s sounding like lyrics delivers! Labar and Keifer nail down some real good licks and solos. Holy hell boys! I’m 19 at the time and I know your ripping off Aerosmith here in the lookey lookey video department but you guys pull it off with a great well written song. Added bonus points for the use of cowbell in this song… so umm, shake it all night long!

“Nobody’s Fool” — Outta the ’80s power play handbook comes the big power ballad by track three! “I’m not your fool, nobody’s fool” hammers Keifer on lead throat. The song has a mid tempo metalish slowish groove so let’s cut to the chase. This song was played a million times on MuchMusic and well, well Boss Jovi and sidekick Richie Sambora show up at the end of the video and leave with the chicks! Looking back at the time of its release, I got a queasy uneasy feeling about this tune but 30 years later, I must be mellowing as it’s not too bad.

“Nothin’ For Nothin'” — More straight ahead rock! The drums push the tune and Keifer as he does slams down his guitar and howls some rock vocals! This song is a wham bam thank ya mum tune! This is not rocket science folks. It’s just good time happy happy rock!

“Once Around The Ride” — Ha! Simple 123 rock. This is another no frills fun ’80s rock served to the masses. “Once Around The Ride” could have been called easily “we’re not beating around the bush.” In other words, straight forward with no looking back. Plus for extra kicks, it sounds like once again Keifer‘s gonna toss a lung when he hollers “Onnnce Aroooooound The Riiiiiiide!” Yee haw! I miss this stuff…

“Hell On Wheels” — Yep. Keifer takes the wheel on the tour bus and its full boar 140 mphs on a one way street with oncoming traffic and Keifer ain’t budging! The band lays it down thick and hard. Hey! Throw down some 4/4 tempo! We got a slick roxx track!

“Somebody Save Me” — Are the Cinderella guys pulling an AC/DC riff and they roll a glam fatty and well “Saaaaaaaave Me! ” The verses are straight ahead rock 101 with a pretty catchy pre chorus. The Keifer/Labar guitar combo knows its limits and lays down some dirty rock riffing. Yeah, I dig this tune man in a 1986 kinda way!

“In From The Outside” — Quick out of the gate and Keifer, Labar and crew keep the party going. The chorus is pretty good with the drums plowing through and the guitars doing those quick stop starts with Keifer and his voice going. Good tune.

“Push Push” — Ha! This in the lyrics department reeks of ’80s cheese! The music is straight ahead rock. Some big time power chords and some big time solos all wrapped neatly in case you need a little “Push Push!”

“Back Home Again” — Dudes and gals, I loved this tune man and still do. You know the song kicks out of the gates quick with snap drumming, bass and guitar. Keifer tells the tale of hitting the road at 17 and boom, this song rocks. Keifer hits the grand slam with “Back Home Again.” Sure, it sounds like a mix of AC/DC and later day Aerosmith and I’m OK with it actually — real OK with it! The guitar solo on this song is fantastic as it goes to wang bar heaven on it but keeps itself in check! One great tune.

In conclusion, the Cinderella dudes put out a string of real solid records after Night Songs which some day I’m gonna tackle! Long Cold Winter, Heartbreak Station and Still Climbing are all solid releases with no two albums sounding alike. Although these guys put out decent product, that picture of them on the cover of Night Songs totally came back to bite them in the ass within a matter of five years as I think when people think of Cinderella nowadays, they are judging them by their look. Like I have always said people… Listen with the ears!

Review by Pam:
This is the debut album from these Philadelphia, PA rockers, and did it ever set the world on fire! Cinderella showed the masses that they weren’t afraid to rock with songs such as “Night Songs,” “Shake Me” and “Push Push”. “Nobody’s Fool” is a great power ballad and charted at #13, followed at #66 by the unstoppable “Somebody Save Me.”

At this point in their career, Cinderella had the looks and talent to reach the top of the glam scene. Tom Keifer‘s gritty and wailing vocal delivery put Cinderella on the pop-metal map. This classic easily gets two thumbs up!

Cinderella‘s “Somebody Save Me” video:

Cinderella – Somebody Save Me (Official Video)