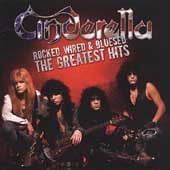 Review:
Anyone that has stumbled upon this website should already know that Cinderella is one of the greatest 80s hard rock bands, and if you haven’t heard them yet – what are you waiting for? They were able to deliver both on album and live on stage. The compilation follows the band in chronological order from their hard rock beginnings to their shift into blues-drenched rock, with both sounds being equally impressive.

All of the hits are here, from the shit-kicking “Shake Me” to the massive balled “Don’t Know What You Got” and everything in between – like the experimental “Shelter Me”. The only problem is that if you already own Cinderella‘s Once Upon A… there really isn’t much need for this album – although this record includes “Fallin’ Apart At The Seams” which is one of the most underrated songs in Cinderella‘s catalog. This collection sure does bring back lots of memories though, songs like Gypsy Road were staples during my high-school partying days.

The booklet is well done and features several pages of band history, complete with interviews. But this collection may only appeal to completists and new fans as it doesn’t offer anything new musically. For the real Cinderella fans the DVD version – titled Rocked, Wired & Bluesed: The Greatest Video Hits – should be the real treat. www.cinderella.net