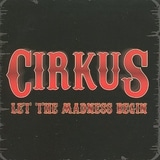 Production:
Produced by Ric and Snetan. Mixed by Chris Tsangarides.

Review:
I always thought the circus was supposed to be entertaining. Well, this ‘cirkus’ better go back to the drawing board because the elephants are yawning, the clowns are sad and the bearded-lady is threatening to shave.

Playing a brand of 70s inspired Ted Nugent rock, minus the blazing fretwork, Sweden’s Cirkus sounds dated before their time. But it isn’t so much the old-fashioned approach that annoys me, it is the lack of focus and choppiness (for lack of a better word) on several of the tracks. Albums are supposed to have a certain flow to them, yet Let The Madness Begin is more like a bumpy ride on a dirt road with flat tires.

“Trashy” for instance, a song about a stripper, seems to be stuck in neutral and contains one incredibly annoying chorus. “Everlong Lasting”, which takes a peak into the current state of the world, is much the same – coming across as bleak as its lyrical content. These two songs in particular are especially annoying, both in the vocals and the uneven beat. To end the disc you are treated to a cover of T-Rex‘s classic “Get It On” that doesn’t add anything to the original except for a guitar solo that seems completely out of place.

Occasionally Cirkus do get things right though, like on “Hard Headed Woman” which is a revved-up track that perfectly captures the 70s arena rock sound. The groove oriented “Chexx Mate” is interesting as well, even if it does sound out of place with its southern tinged Sister Whiskey vibe. “Fuck’em N’ Flee” isn’t bad either, but I’m disappointed in the mix on this song as the vocals are pushed way back – something I found strange considering the Grammy nominated Chris Tsangarides of Judas Priest and Black Sabbath fame was behind the mixing board.

What I find so frustrating about Let The Madness Begin is that I can tell it could have been so much better. The vocals can be annoying one minute and flawless the next, and the same goes for the rhythm section which will suck you right in one moment and then seem lost in space the next. Cirkus have a sound that will separate them from so many other Swedish bands out right now, but they have yet to write an album that will propel them to the top of the crowded hard rock heap.