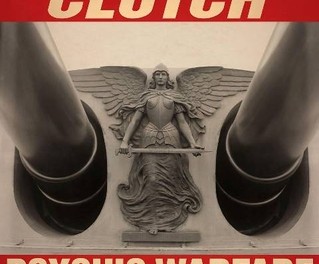 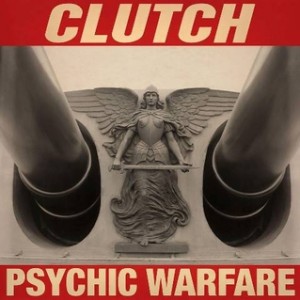 Review:
Clutch‘s Psychic Warfare came out in October 2015, but only on CD. I wanted it on vinyl so I waited (not so) patiently for mine to arrive. Here is my track by track analysis of the album:

“The Affidavit” – Why don’t you just start at the beginning now?

“X-Ray Visions” – After a very brief spoken word to begin the album, this song grabs you by the throat and says if you don’t bob your head up and down, I’m gonna kick your bitch ass.

“Firebirds!” – This song brings me back to my teens when I had lots of money to burn on fast cars. The Firebird was my car of choice. I usually performed the “Triple T” — T tops, tire smoke and tunes. “But I don’t own a Firebird, perhaps this Datsun will do.” Umm No. “Firebirds! Energy weapons! Both of these things are interesting to me. I don’t care, how you get them. I need them now and need them urgently.” Umm yes.

“A Quick Death In Texas” – This one has a definite Texas flavour. I had to look to see if one of the Vaughan family members had a hand in this, or perhaps ZZ Top. A warning song to all those men that mess with another man’s wife.

“Sucker For The Witch” – Wicked, wicked bass rules this song. I have a little bit of an obsession for witches as well even if it goes my Catholic upbringing. I am also a sucker for a song that salutes Stevie Nicks, and absolutely kicks some serious ass.

“Your Love Is Incarceration” – A little bit of funk is never a bad thing. There is a line in the song about “30 days in the hole.” This is not a shout out to Humble Pie, however there definitely is an early ’70s vibe to this song. If Humble Pie had decided to recruit the guys from Funkadelic to record a song, it might have sounded something like this.

Before I flip the record over, I have to listen to this side again. It really is that good.

“Doom Saloon” – Guitar strums fill up this song with one in the foreground and one sounding far away.

“Our Lady Of Electric Light” – Our lady of awesome — electrified music more like.

“Noble Savage” – This song is punctuated by pounding drums and screaming vocal chants. “Unapologetic lifer for rock and roll” — is Clutch singing about me?

“Behold The Colossus” – A cool tune about Gargoyles that are pissed off, and won’t take it any more. The guitar work here is especially tantalizing.

“Son Of Virginia” – It’s kind of like a mellow Godsmack song. The words seem to have a cryptic meaning with a Devil Dog seen on All Saints Day.