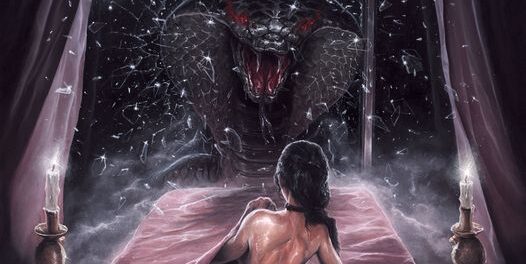 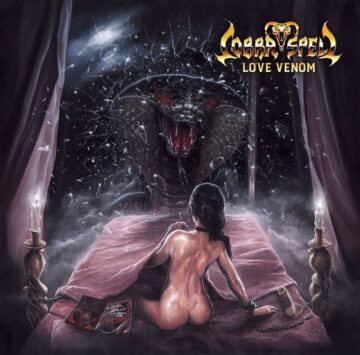 Review:
As I ponder the inevitable purging of prose that hangs in the balance of my subconscious, all the while as I attempt the resurgence of a long, far too long, hiatus in a passion hobby of mine. The hobby of not only finding, collecting the wares of and thoroughly enjoying incredibly talented musicians and bands, bands that are far far off anyone’s collective radar. Sharing these, well worth your time bands, with the end goal of turning readers onto something they may not otherwise have noticed and of equal importance providing some exposure to a well deserving band or artist.

That said, allow me the pleasure of enlightening you with this dandy of a five piece sleaze/hard rock act from the Netherlands, going by the moniker of Cobra Spell and brandishing their debut, independently released four song EP Love Venom.

From first glance at the period perfect cover art by acclaimed album artist Velio Josto and onto the band name and logo, one can already envision the treats in store for them once the needle hits the groove. Spoiler alert — this EP will not disappoint. If you wish further confirmation, just flip the CD case or album over and the images of the band will cement this train of thought as the band looks as amazing as they sound.

Speaking of the band members, they are a collection of young up and comers (truthfully already here’s) in the hard rock arena having a great amount of pedigree in their short time on the planet with a number of bands many reading should be familiar with. Sonia Anubis (Crypta, ex-Burning Witches), Sebastian “Spyder” Silva (Idle Hands, Silver Talon, ex-Spellcaster), Alexx Panza (Hitten, Jack Starr’s Burning Starr), Anjelina Vehera and even the new drummer Léonard Cakolli (Sharx, Adam Bomb).

As the immersion in the EP begins and continues (no end as I don’t see this one leaving the queue for sometime), the synopsis is a very solid hard rock/sleaze rock endeavor that has a million nuances and ’80s artist nods. While listening, you’ll find yourself backing the player up as you try and “name that tune” as the band flashes in and out of their original music with, maybe inadvertent, nods to their idols courtesy of a riff, squeal, drum fill or harmony. All four songs brandish a wealth of influences and for me I hear heaping helpings of Fastway, Tesla, Heavy Pettin’, Lizzy Borden, Spread Eagle, L.A. Guns, Mötley Crüe, W.A.S.P., Tora Tora, Sweet FA and newer lesser known artists like Undone, Crazy Lixx and Smoking Aces. The Fastway influence, at least for me, is heard in Alexx‘s soaring upper register vocals along with the band’s playing. As I spin and spin the EP, my mind’s eye can’t help seeing Sammi Curri prancing about belting the tunes out…

The opener, “Come On Tonight” has a Scorpions-esque opening, guitar squeals and glass shattering scream, followed by a chugging verse riff akin to Britney Fox‘s “Girlschool.” This one is pure Sleaze Roxx Nirvana. “Poison Bite” — another up tempo rocker with a Maiden-ey or Priest dual guitar intro/pre-verse showcases once again the dual guitar threat of Sonia and Sebastian and the bands’ proficiency at striking ’80s anthemic gold. I love the pre-solo bridge and the “woah o woah’s”, followed by the solo that is as tasty as any found on all your dear to heart classic rock records.

“Love Venom” starts a bit slower in tempo and this continues into the verse, of which everyone will announce the heavy influence of the Scorpions with the dueling harmonic vocals. If you pay attention, you’ll get a good smattering of Dokken as well. The up-tempo verse just before the solo has the coolest series of riffs I’ve heard in a long while. Those that appreciate guitar noodling will catch it as its difficult to capture in words. The key change in the outro adds just another layer of wow factor that shine in recordings from musicians that get it and this EP is slathered in “wow.” “Shake Me” has a heavy early Skid Row / Sebastian Bach vibe to it, along with that ever present Dave King / Fastway swagger. It’s a solid closer to a near perfect EP.

I can’t stress the proficiencies of the musicianship and songwriting. The band has captured the ’80s Sunset Strip feel almost to a “T” in the best possible ways. The dual attack shredding and sensible yet infectious riffs provided by Sonia and Spyder are amazing. My word, can these two play. The layering of drums and bass tie the whole production together. The infectious chorus and harmonies bring goosebumps and encourage sing alongs. Alexx‘s soaring metal bravado vocals are the cherry on top of this sleaze rock sundae.

You don’t have to get hung up on my words. Listen for yourself and become smitten like me or make some audacious declaration that can only be attributed to absolute ignorance and jealousy. In a year like 2020 and after a too long a hiatus, Cobra Spell have certainly brightened up this year and transported me back to a simpler time. For that, I am grateful. I could easily prattle on for pages and ages touch pointing all the little nuances that Sonia and the gang added into this EP for my aural appreciation. I am ready for what these cool kids come up with next.