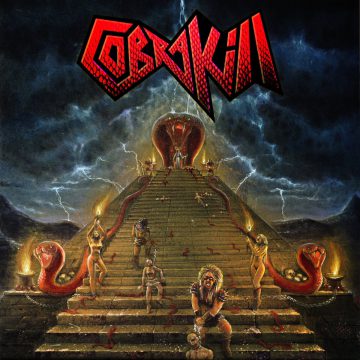 Review:
Cobrakill consisting of lead vocalist Logan Lexi and guitarist Randy White definitely have a lot of song ideas. Unfortunately, they decided on cramming about five different song ideas into the opening track “Arena of Sin” of their three-song self-titled EP. It’s a real shame because the duo who are backed by bassist Jochen M. and drummer Eike J. appear to have some cool ideas but they give them all a three to 40 second tryout during “Arena of Sin.” The opening track does start off promisingly with a simple guitar riff but by the 45 second mark, you get a very “brown” toned guitar solo clearly taken from the Eddie Van Halen playbook immediately followed by a female voice moaning or saying whatever she is saying. All of this is in the first minute of the song! How strange….

Given the major changes in direction during the opening track that can occur literally in a few seconds, it’s really hard to get into the song. Really, there were enough ideas for about five different songs. Some bands could have probably milked that into ten songs. The next two tracks on Cobrakill‘s EP are “simpler” and definitely have less variations but are also not quite as good as the opening track. Logan Lexi‘s vocals are an acquired taste at best. I find his vocals a tad annoying but “listenable.” White has yet to find his guitar style as he seems to experiment with different styles throughout the EP from the previously mentioned Eddie Van Halen snippet at the beginning of “Arena of Sin” to a rather odd and almost unfinished guitar solo on “Amber Eyes.”

I think Cobrakill have the potential to come up with some good songs. That potential has not been reached on their debut three-song EP. Lexi and White really need someone to sit down with them and get them to focus on writing simpler songs based on a few ideas rather than the pot pourri that can be found during the opening track. Overall, Cobrakill‘s presumably debut EP feels like some rough demos recorded in a garage with not much thought on song flow. I do like the EP cover which enticed me to put the CD on for a spin in the fist place.