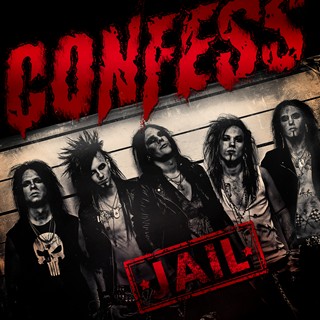 Review:
I ‘confess’ that I was blown away by this band. As the new century got older the music machine overseas continued to create great music, and in 2008 a Swedish singer named John Elliot put together a crew of extremely talented metalheads named Confess. They began to make demos, play shows, and quickly gained notoriety wherever they went. They released their first independent EP The Gin Act in 2012, toured behind it for a couple years, and then went into the studio to record their debut album Jail.

Confess has the heavy style of classic Skid Row, but with the modern sounds of Crashdiet and Hardcore Superstar — they are gritty, raw, and powerful. This is not glam rock, instead it is down and dirty heavy metal with a hint of punk influence that would scare Poison and Bon Jovi off the tour. The lyrics are raunchy and sometimes mean — they aren’t trying to fool anyone with lyrics about being a tender and loving teddy bear. With lines like, “Why don’t you lay down and die?,” “This is the end of our relationshit,” and a seemingly sweet ballad with the line “Show her love… with a bullet,” and song titles like “Relationshit”, “Intervention”, “Cardiac Arrest” and “Pay Before I Go”, I think you can figure out what Confess are all about.

But it wasn’t the lyrics that made me dig this band. As an ’80s metalhead musician myself, I noticed the talent of the band. The music is great, and Confess are far more talented than many others in the genre. Their twin guitar attack would make Judas Priest‘s Glenn Tipton and K.K. Downing smile, along with a stout and brutal rhythm that will give you a bloody nose if you look at it the wrong way. Basically, the band is made up of five gifted musicians who together make epic music — I can’t help but think what a tour with Confess and Skid Row would be like.

Since I can’t really say anymore about the band’s talent without sounding redundant, I’ll tell you a little about a few of the songs. First of all, there wasn’t a song on the entire album that I didn’t like. I bugged the crap out of my wife for two days straight blasting Jail. My favorites are “Relationshit”, which is a hard driving assault that perfectly sums up the feeling of kicking an unwanted girl to the curb, “Scream”, a rhythm section driven song that makes you want to slam into something, and “Pay Before I Go”, which could easily be a hit in the US with its catchy and heavy hooks and harmony vocals. “Setting Sails” has that type of vibe that makes you believe you’ve heard it before, even though you haven’t — I can’t explain it. The song doesn’t remind me of anything, because the band has their own style and aren’t copying anyone, but for some reason it sounds familiar.

Other songs that deserve notice (they all do) are the badass “Cardiac Arrest”, the progressive heavy metal masterpiece “Intervention (Sin & Tonic, Pt.2)”, and a cover of Tina Turner‘s “What’s Love Got To Do With It”, a very good version of a classic. Honestly, as a metalhead, lots of bands have done covers of songs that weren’t metal. Some are good, some are bad, but this one is damn good — which is saying a lot seeing as I never liked the original much.

Wrapping it up, Confess kick ass — there really isn’t much more to say about them. If you are an ’80s metalhead, grab this album. You will swear it was released during that decade, and even though it wasn’t this band has it right. Sex, drugs, and metal! I would be ecstatic if Confess charted in America, it would mean that everyone here woke up and remembered what real music was.