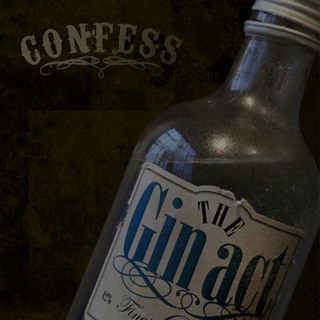 Review:
The Gin Act is the second shot for the Swedish sleaze band formed by singer John Elliot (their first being 2010’s Lights Out) and hell… this EP slips down well.

First on the rocks is “Divine 69” with its twin axe attack, gang vocals and contagious chorus. “Delightful Lies” opens with an ironically mournful riff before the Maidenesque “Flickorna Pa TV2” (surprisingly written by a member of Roxette!) makes life a little heavier, nastier and definitely darker. What hits me throughout The Gin Act is melody — and believe me it’s served up in double measures. Elliot‘s diction is perfect, his sleazy delivery definitely West Coast, whilst guitarists Daniel and Blomman trade spacey power chords and fills with restrained and beautifully constructed solos. The rhythm section is heavy but subtle, making these guys tight but loose — and I’m converted.

Confess do let themselves down a little with “Get Wasted” by throwing a great hook away with some pretty lame lyrics. It should have been a great live anthem but “wanna get wasted spend the night away/party with girls and fuck all day” has me reaching for the next track. Thank God then for the EP’s stand out, “Sin & Tonic”, which soon restores order and closes the disc in epic style with its subtle intro, complex arrangement and welcome return to lyrical form.

The Gin Act is a real tonic and you best serve it cold — but only five tracks? I’ll have another — and it’s your round I must ‘confess’.