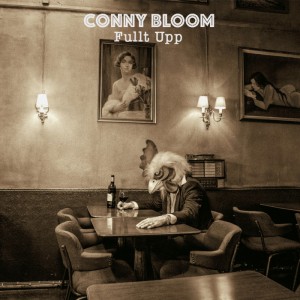 Review:
There are some records you know that might be hard for you to listen to, but you still eagerly await them as you really value the artist’s previous musical achievements. One such record for me was Fullt Upp by the Swedish artist Conny Bloom.

The singer Conny Bloom is known for being the mastermind lead man of the Swedish funk rock group Electric Boys, who had some minor hits in Europe/USA back in late ’80s / early ’90s with “All Hips N’ Lips” and “Psychedelic Eyes.” Electric Boys were one of these groups who with their style definitely stood out of then hard rock scene.The band’s heavily funk influenced music, incorporating all kinds of instruments together with strong lead vocals and some of the most sung along choruses I have heard in the genre. Electric Boys had pretty good timing but being from Sweden, they were a bit behind in regard of touring USA back in the day. The group returned in 2011 with a very well crafted comeback record And Them Boys Done Swang and then followed up with the stellar Starflight United in 2014. Between both of these records, the frontman was pondering the possibility to release a solo album, written all in his native language of Swedish. The wait was long but such a record has finally surfaced in the form of Fullt Upp.

First, right off the bat, one thing must be stated. The record is sung all in Swedish, which to some may be quite a put down. This is a very similar situation as with the earlier reviewed IRA’s “Sex”album which was all in Polish, which to a lot of my English language using colleagues was pretty indigestible, as the language was totally out of this realm for them. Getting through Fullt Upp, I can imagine what they had in mind. The Swedish language here has a very strong presence. There are but a few lines in English and everything else is in Swedish. If you are not about to listen to this album with an online dictionary, or you’re not fluent in Swedish, it may sound to you as a lot of gobbledygook.

If you are a fan of Bloom’s previous work so that the use of the Swedish language is no issue for you, prepare for another hurdle. The music here is quite detached from what he was recording with Electric Boys. It is less hard rock, funk oriented, much more mellow, and in some parts going in the directions of country and blues. There are of course some pretty catchy choruses from Bloom, which are impossible for me to repeat due to language barrier, but all in all in my opinion, it is much less catchy than his Electric Boys recordings, and even his previous solo effort Psychonaut.

My favorite track of the record is “Ronnie Petersson” which by coincidence is an instrumental tune. The other that stands out to me is “Skattmasen” (a song about a tax official). All in all I hate to say it, but even after more than a few listens, I cannot seem to catch on with this record. It did not grow on me, and certainly didn’t hit me during my first few listens. I say that despite the fact I have big respect for Bloom’s songwriting, for what he did with Electric Boys and all of his previous musical endeavours. This record to me is regretfully not only lyrically impossible to understand but also just not fun enough, not energetic enough, with very little trace of Mr. Bloom’s trademark funk and rock claw.

As usual, what I advise is to try to listen to a few of the song samples from the record. I think there are several available online. Then decide whether it is maybe your cup of tea. But if you prefer the hard rock / funk rock sound of Electric Boys, or even Bloom’s previous releases, chances are you may be a bit disappointed with Fullt Upp. All in all, I think this record might be good for people with VERY open minds. Even better, if they would be fluent in Swedish.