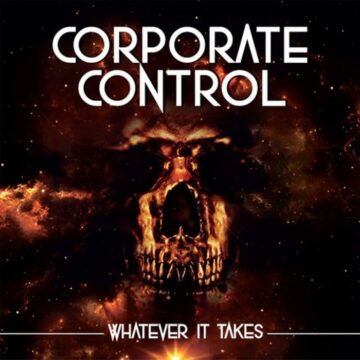 CORPORATE CONTROL
WHATEVER IT TAKES
Released on February 19, 2021 (Perris Records)

Review:
Those genial purveyors of all things sleaze and glam rock at Perris Records have provided an answer to one of those “Whatever happened to…” questions, with the timely release of this album. Paul Sabu – the man in question, and heavyweight journeyman guitarist of Only Child, AOR and of course his own band Sabu – has joined forces with Marcus Boelz and band founder Barry Sparks (ex-Dokken) for this almost AOR supergroup and their debut album.

So has the time away been kind to Mr. Sabu? The album opens with “No More” and the oriental style intro gives way to a decent singalong rocker that heralds possibilities despite some breathless, rather affected vocals from the man himself over a catchy chorus. “Leaving It Behind” continues in this vein; a chugging along tale of getting away from it all with even raspier vocals,  but solid work from Sparks and Boelz, and the guitar playing of course speaks for itself. The album’s title track is up next and features yet another radio friendly chorus but this time the vocals are strained and rather grating.

“Waiting For The Roar” is a more subdued affair, both in production and delivery until two thirds of the way through when Sabu attempts the archetypal rock scream and doesn’t quite make it. “Not In Our Hands” follows and has another fine chorus and thankfully a rather subtler vocal performance. The strutting “You Can’t Kill A Dead Man” has a real Cinderella styled feel to it and is far more suited to the cut glass vocal style that has been adopted whilst also featuring a rather cool, trademark  guitar flourish.

“Vertical Horizon” flows through and the vocalist seems more at ease this time, giving way to another guitar flurry ably supported by his very cool and solid rhythm section. “Radio” is not unexpectedly another hook laden track with excellent backing vocals and the guitar really soaring effectively. “What About Us” closes the album and is a passionate, mid-tempo ballad with possibly the best vocal of the set and stellar playing from the entire band.

A triumphant return? Not entirely. The production is a little light and, at times, too low and Mr. Sabu’s vocals will certainly divide opinion. Never the greatest singer anyway, he often sounds tired and strained throughout whilst attempting to sound the debauched end of cool that doesn’t always fit the song. One can only imagine what the likes of Ted Poley, Tom Keifer or the late, great Jani Lane would have sounded on this album.

The songs themselves are terrific. Radio friendly AOR with memorable choruses that never outstay their welcome or subject you to lengthy guitar solos which, to me, is a great relief. It goes almost without saying that the guitar work is brilliant and the band playing as a whole is practically faultless, but it is the vocal performances that will provoke the most debate and possibly rightly so. Personally, I got used to them after the second play, but I suspect that many won’t give it that much of an opportunity, and that would be a shame because, overall, the great songs and flawless playing deserve at least a proper chance.

Corporate Control‘s “Whatever It Takes” song: