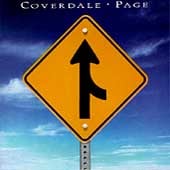 Review:
This was the much-publicized collaborative effort between Led Zeppelin legend Jimmy Page and Whitesnake/Deep Purple vocalist David Coverdale. Certain songs like “Shake My Tree”, “Pride And Joy” (the debut single), and “Feeling Hot” do their share of rocking, but the majority of the album is fairly mellow, as demonstrated by the excellent ballad “Take Me For A Little While”.

The album has good musicianship, in fact Page hasn’t sounded this motivated since Zeppelin‘s heyday, but it just doesn’t rock as hard as it could. All in all a fairly good album, but for some reason it just didn’t seem to move me. Coverdale/Page is an album you will either love or feel disappointed with, I found the later and only give it one thumb up.