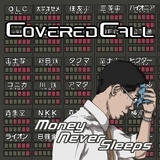 Review:
You would think a CD that immediately grabs my attention would be easy to review. That’s not the case here.

Money Never Sleeps, from Sweden’s Covered Call, is jam-packed full of vocal harmonizing, solid rhythm sections, and impressive guitar work. These are all the ingredients I look for in a band and the songs have a fun, almost happy, approach. So what’s the problem, right? Well, like some recent releases by other bands, Covered Call‘s feet are planted solidly in the 80s – too much so. Don’t get me wrong, I’d rather hear something from the 80s than today’s music, however if you are a band releasing product in the here and now, you still need to sound, to a degree, ‘up-to-date’. Show your influences, but at the same time, don’t sound dated.

“Shine” for instance is a near great song, but sounds exactly like something Journey would release. “Anything You Want”, the obligatory ballad, could easily be Trixter or Stryper or…yeah, you get the picture. Former Candlemass and Therion frontman Thomas Vikstrim has a dynamic vocal range, both angelic and soaring while the musicianship is top-notch and never fails to impress.

Money Never Sleeps is not a bad CD by any stretch of the imagination – it begs to be liked – it almost demands it. However I would like to hear Covered Call take their influences and put their own identity on it. Forget any radio airplay, the music media will never give a release like this a chance. That’s simply because it too closely resembles music that came out in the 80’s, not something that fits into today’s genre. Honestly, that really isn’t fair because it’s obvious Covered Call believe in what they are doing, you can hear it in their music. It’s just too bad, they’re 20 years too late.