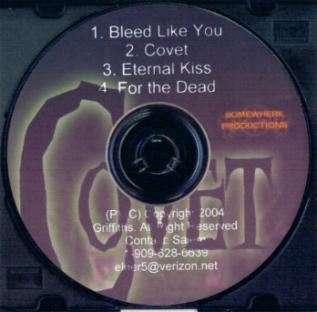 Review:
This is one of the strangest releases that have ever come across my desk. This is a family affair – father, mother and three sons – that look like heaven and hell combined, with the father doing his best Catholic priest impression while one of the sons looks like a Deicide cast-off. Musically things are rather dark and doomy with Marilyn Manson type keyboards while the lyrics are heavily influenced by the horror genre.

Being a demo, the production is lacking a bit, but it works for their dark material. The major problem here is the vocal delivery, which too often appears to be off key. “Bleed Like You” isn’t a bad tune, but it is “For The Dead” that is my favorite. It has a spooky guitar line that leads up to the chorus, showing that the band is capable of cool music. However this isn’t really my type of music, and one great tune isn’t enough to peak my interest. If any of this sounds at all interesting, watch for their full-length release due later this year.