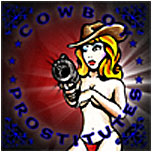 Review:
2005 may have just gotten into full swing, but as far as I am concerned the Cowboy Prostitutes are THE band to watch this year. Sadly I will likely watch them fade into obscurity because they are just too damned good for the record buying public. Last year Velvet Revolver and Brides Of Destruction had great opportunities to bring hard rock back to the mainstream – now why couldn’t they have released something this incredible?

When I reviewed their single a few months ago I wondered if the band would be able to sustain their aggression over an entire album. Not only did they do that, but they upped the ante and have spewed out even more hostility. Vocalist Luca Isabelle sounds like a venomous Billy Corgan, especially on “Joy”. The addition of a second guitarist has really pushed them over the top, easily rivaling such new sleaze masters as Beautiful Creatures. You wouldn’t expect to hear a piano in music like this, but it adds an extra barroom quality that fleshes out the album.

If there is a bad song on this disc it must have got deleted from my copy, because there isn’t a lackluster cut to be found. The ones that really stick out for me are the aforementioned “Joy”, the Junkyard swagger of “Television” and the hyper-driven “Alive N’Well”. “Blood On Your Blade” is a killer full-throttle rocker that slams itself into your head. OK screw this, I could go on and on about every song on this amazing release, but it’s hard to type while headbanging.

There really isn’t much more to say other than BUY THIS ALBUM! Retrospect Records has really snagged a gem here, hopefully they can get people to take notice. In the meantime beg, borrow or steal a copy of Cowboy Prostitutes – because underground classics like this rarely make it out of the gutters. If you don’t believe me see for yourself at www.cowboyprostitutes.net.