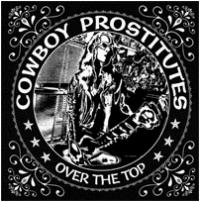 Review:
I have to give the Cowboy Prostitutes points right off the bat for the original band name. Thankfully the music is as good, if not better, than their moniker. On this two song single these Swedish rockers employ an attitude driven L.A. Strip sound like that of Junkyard and The Hangmen.

“Over The Top” is a high-energy rocker with an irresistible chorus. There are so many things going on here – a wall of guitars, piano (something you usually don’t see in a sleaze band), etc. – that at first I thought this had to be a six-man band. But even though the song fires on all cylinders, it is the vocals of Luca Isabelle that stand out – a gruff and gritty version of Taime Downe and David Roach. “Downtown” is much slower paced number that doesn’t pack the same wallop as the previous song. However you have to love lyrics such as “I’m gonna drink myself to death” – alcohol, music and attitude are the recipe for great music.

It will be interesting if the Cowboy Prostitutes can sustain their aggression over an entire album, but I am definitely interested in hearing more. MP3s and information can be found on their official website at www.cowboyprostitutes.net.