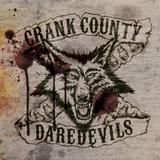 Review:
They say time heals all wounds, but in the case of North Carolina’s Crank County Daredevils the wounds have festered in the three years since their last album Livin’ In The Red. In that time rumors circulated of the band’s demise, but instead they kept plugging away, this time with a new guitarist and drummer.

One thing you have to admire about the Crank County Daredevils is that they stick to their guns. This self-titled CD features the same unrelenting sleaze metal that they have played since their formation. They haven’t become millionaires, or household names, and I doubt they give a shit about any of that. They don’t need a record label and they don’t need fame and fortune, all they care about is delivering raw, loud and mean music to a loyal following.

You can call this album predictable if you want, because if you’ve heard any of their music before you know exactly what to expect. Frontman Scotty P. still sings as if he is coughing up a razor laced fur-ball and the rest of the band hangs on for the wild ride, with new member Rory Kelly dropping killer riffs every chance he gets. Each song blends into the next as the Crank County Daredevils continuously beat their unrelenting sleaze into your cranium, and after sitting through this ten song platter you’ll feel as filthy as Pigpen from the Peanuts cartoon strip.

“Life Under The Blade”, “Falldown”, “Last Dance” and the perfect dose of aggression “Engines Revin'” are all excellent additions to the Crank County Daredevils catalogue, as they are just as mean and nasty as the band’s best material. But wait, are these guys actually tackling a ballad, gasp, on “It’s Calling Me”? Don’t get too worried, if this is in fact a ballad it is the roughest one ever.

The Crank County Daredevils obviously adhere to the old adage ‘if it ain’t broke don’t fix it’. Because groups like this stick to a specific formula nothing catches you off guard. Instead it is like always purchasing your favorite brand of beer or cigarettes, you do it because you know you won’t get let down and they will always be satisfying. That is the Crank County Daredevils sound in a nut-shell.