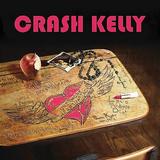 Review:
One More Heart Attack by Crash Kelly served as my introduction to this band based out of Toronto, Canada. I have to admit that I was so impressed after one listen to this disc that I went online and ordered his two previous releases. Crash Kelly‘s mainman Sean Kelly sure knows how to write a great song – I cannot stress that enough. Sean crafts an album chocked full of memorable classic rock tunes mixed with a hint of power-pop. How he isn’t all over the radio is beyond me, as the tunes on this album are hook-laden gems that will stick in your head long after you have quit spinning the album.

While recorded on two separate coasts (and countries for that matter) with two separate teams of collaborators, this album is as cohesive as an album should be. It is not four ‘hits’ and the rest filler. Stick it in, turn it up loud and grab a beverage because you’re in for a treat for your ear-hole!!

Kicking off with the title track, Crash Kelly stands out beyond what you are forced to endure on modern radio with memorable melodies and singing about subjects everyone can relate to. You can definitely hear the 70’s influence of Thin Lizzy and Cheap Trick mixed with Too Fast For Love era Motley Crue, Samantha 7 and the entire catalog of Enuff Z’Nuff. But Sean brings it into today with tasteful riffs, hooks a plenty and an ear for harmony like no other on “Jenny Jet”. My favorite cut has to be “Old Habits Die Hard (And The Good Die Young)”, a galloping rocker about all things sinful and featuring a most memorable solo breakdown section. From there you head into the straight-ahead rocker “The Devil You Know” ending ‘Side A’ with a song about lost loves and heartbreak entitled “Love Won’t Die”. Former Guns N’ Roses rhythm guitarist Gilby Clarke makes a guest appearance on this track.

‘Side B’ begins with “Nottingham Rock City Blues”, a cautionary tale of debauchery encountered while on tour with The Quireboys, complete with a wah-infused slide solo. “Right Girl, Wrong Time” is a tune every guy can relate to. “Trash Talk”, the first single off an album that is destined to be a fan favorite of 2008 is next. This cut has a T-Rex meets Bon Scott-era AC/DC swagger to it. “Falling In And Out” features some killer bass runs and subtle Wurlitzer-esque keyboards all laid over Sean‘s wonderful sense of harmony and melody. The album comes to a close with a surefire anthem called “16 On A Summer Night”. This tune will definitely take you back to your High School days (or daze).

That’s what makes this album so good, besides the killer musicianship, is that Sean Kelly can really strike a nerve with each tune, taking you back to any time in your life all-the-while allowing you to escape and just enjoy the music. One More Heart Attack is a well-crafted masterpiece by all involved!