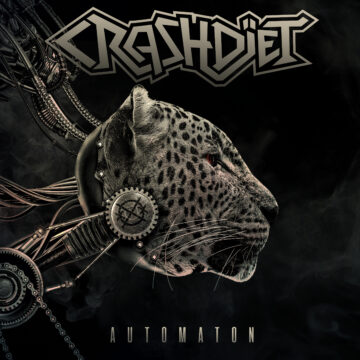 Review:
Crashdïet‘s new album Automaton is on a new label for the band and I would not rank them overly high on how they distributed this disc. While the album was out at the end of April officially, Amazon.com in the US only got theirs in on May 27th. So, a full calendar month after the rest of the world got theirs, we got to check out the new release from one of Sweden’s biggest sleaze metal bands. The old expression is, “Good things come to those who wait.” Well, wait we did. And, good things, more or less, have come wrapped in plastic!

This album, the second with new vocalist Gabriel Keyes, sees the band take their hashtag #sleazemetal in a little bit of a different direction — at least, a little bit. Instead of more crunching guitars and screaming vocals, there are a lot of very Euro power metal inspired hooks here which might be refreshing to some but are disappointing to me. Where Rust stayed very true to what I consider to be the sound of Crashdïet, this ventures a tad for sure. But, still delivers a lot of heavy stuff to be proud of. In fact, more than a few songs are haunting and will stick with you throughout your day.

“Together Whatever” seems to be the band’s go to when promoting the album and with good reason. It delivers a very catchy chorus and a solid groove that sets the tone for the album as its first real song though second track. “Shine On”, on the other hand, delivers on a higher level with a chorus I’m not sure would’ve been in the band’s playbook with any other singer. Very catchy chorus with very cool lyrics. I’m in love with this track. You know, it almost feels like it could be a wrestling theme song? I kind of get the Cody Rhodes “Kingdom” vibe out of this track? Wrestling fans might react to that. “No Man’s Land” has entirely too much of the power metal influence that turns me way off. “Darker Minds” has a more ballad feel with some country stylings in the chorus. Normally I’d oppose this but I don’t. It works here.

“Dead Crusade” has an almost Pantera influence in the guitar intro. The song itself harkens back to a more traditional Crashdïet sound and is a welcomed sound on the album. Though very heavy, this feels more like “sleaze metal” than a lot of the other tracks they’ve uploaded with that hashtag. “Powerline” features Michael Starr of Steel Panther. He delivers his trademarked, or borrowed trademarked David Lee Roth “Oww!” noise which really fits here very well. The song, though, is solid but not as epic as you might imagine given the added star power. “Resurrection of The Damned” continues to stay away from the power metal sing-songy pretentious sound that started to creep into the album at times and is a very, very heavy song that would not be totally out of place on Rust. “We Die Hard” is a softer, for this album, slower song that is still a rocker. I would venture to say that this type of song is more in Gabriel‘s comfort zone.

“Shell Shock” is a great song with a lot of military influence. Before everyone could get PTSD from farting in church loudly, the term “Shell Shock” was used almost exclusively for military service people who encountered hardships or traumatic experiences in combat. I’ll spare you the George Carlin on “Shell Shock” becoming “Post Traumatic Stress Disorder” but if you have a few moments and access to Google — search it out. It springs to mind for me here. And, the song is great too. But, the guitars are so heavy, it almost feels like old school Metallica at times and less “sleazy” than you would expect. “Unbroken” feels a lot like “Shine On” which I loved earlier in the album. I would not be surprised to find out this song was written around the same time as the vibe is a little alike and that is a good thing. “I Can’t Move On (Without You)” wraps the album with a softer, acoustic stylings. This shows range as a lot of songs had exceptionally heavy guitars and this revisits simple song-writing. Solid song.

Overall, the vibe of the album seems to take a few turns. There are tracks that really rock and have me begging for more while there are some songs that rub me a little bit the wrong way. Instead of drawing lines to compare the songs to songs by the likes of Skid Row as I did with Generation Wild years ago, I find I hear more influences from pretentious European power metal festivals. These types of festivals would be attended by fugly (not a typo) girls and a gaggle of dudes dressed like Barbarians from their favorite role-playing video games singing renaissance festival sounding sing alongs about nothing that matters to anyone in every day life because these lonely hearts have no life experience to draw from or relate to.

So, now that I’ve pissed off the pocket protector wearing portion of Europe, let me grade the album at a strong B+! While I can’t say I love everything on it, I can say I love quite a few songs on it. And, the incredible talent of this band should be recognized by far more people than it is. During my time waiting for Amazon to deliver, I tried asking about it at a few local record stores and was told they only had stock of a few of their early releases. The person behind the counter, who looks like a punk rock chick who would work in the record store, had no idea who they were, which disappointed me greatly. I suppose breaking in America isn’t easy given the current climate of songs that expect the listener to look the other way as the chorus to old classics like “Heart And Soul” are flat out robbed — I heard one in the parking lot of a store the other day that was a complete rip off of Rod Stewart‘s “Young Hearts Be Free Tonight” and I’m sure no royalties were paid. However, strong hard rock and metal bands that deliver something that a section of society needs, at least I need, should be rewarded. They’re not being rewarded presently.