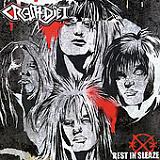 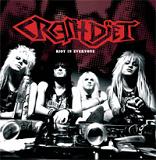 Review:
The bad boyz from Sweden have made one of the best glam records ever. You don’t believe me? Imagine your favorite glam bands and then mix them together, add a little modern touch, and the product is Rest In Sleaze. But to be honest, Crashdiet remind me of a mixture of Ratt, Motley Crue, Def Leppard and Guns N’ Roses, and all of them are great bands.

There is nothing really groundbreaking here, apart from the fact that this album rocks from beginning to the end! Rest In Sleaze opens with a mid-tempo rocker called “Knokk ‘Em Down” which leads to their hit single “Riot In Everyone”. This is one of those songs that’ll be stuck in your head forever! After those two great openers Crashdiet doesn’t stop, they rock on with “Queen Obscene / 69 Shots”. This song is what melodic metal should sound like with its catchy and amazing guitar hooks. Next up is “Breakin The Chainz” which is made so the crowd at the show would sing-along to its infectious chorus. “Breakin The Chainz” is followed with two fast and furious songs called “Needle In Your Eye” and “Tikket”. Rest In Sleaze‘s best moments probably come with these two songs, “Out Of Line” and “It’s A Miracle”. The first of the two is a mid-tempo rocker with a great groove, and the later is a powerful rock ballad destined to be a smash single. Once you hear that song you are going to hum it for a long time. The album closes with two Def Leppard-esque songs, “Straight Outta Hell” and “Back On Trakk”.

Just as this album was gaining momentum (it peaked at #12 on the Swedish national charts), the singer, songwriter and founder of the band, Dave Leppard committed suicide, halting any momentum the band had.

Rest In Sleaze is my favorite album, and I give it 10 out of 10, a slap on the back and a round of drinks for Crashdiet. Give it a listen if you haven’t already.