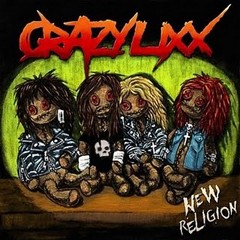 Review:
Let the battle for Swedish rock supremacy begin! Even though there are countless talented rock bands pouring out of Sweden these days, in my opinion only three bands can rightfully claim to be the current kings of the castle. Those three are Hardcore Superstar, Crashdiet and Crazy Lixx – and all three are releasing, and or working on, new material in 2010, so this may be the year we can crown a champion!

Crazy Lixx are the first to step up to the plate with their second full-length release, following the same formula that made Loud Minority an instant classic. With the tight production of Chris Laney (once again) this relatively new band have a perfectly polished sound. Occasionally I get the feeling that the band is being over-produced, but then they lay down a killer hard rock track and all is forgotten.

Few bands are able to capture the sound of the ’80s as well as Crazy Lixx. It is the sound of huge sing-a-long choruses, furious guitar work (supplied by newcomer Andy Dawson, who replaced Vic Zino when he defected to Hardcore Superstar), and memorable songs. Crazy Lixx do it all, whether it be full throttle rockers, mid-tempo melody or heartfelt ballads, these four guys have created the ultimate recipe for success. “21 ‘Til I Die”, “Road To Babylon” and “Lock up Your Daughter” find the band at their rocking best while “Blame It On Love” has that obvious Laney feel dripping all over it. Slowly but surely Crazy Lixx are stepping into Def Leppard‘s shoes, filling the void that Lep vacated years ago. “My Medicine” and “Voodoo Woman” are perfect examples of that.

I only have one complaint with New Religion, and that is a sound that is driving me bat-shit crazy in the percussion of “Rock And A Hard Place”. Is it just me, or does anyone else hear what appears to be the sound of a computer giving an error message throughout this track? It is subtle, but it’s making me insane as I find myself constantly listening for it, thus ruining an otherwise killer cut.

So there you have it, yet another exceptional release from Crazy Lixx. Will New Religion set Crazy Lixx above their Swedish counterparts? That’s hard to say, but the bar has been set awfully high! If this truly is a ‘new religion’, bow down to your new maker — exceptional melodic rock.