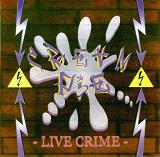 It’s a shame too, because underneath the muffled, crappy sound Cream Pie has its moments. They fall somewhere between Teeze and early Crashdiet with some great riffs by guitarist/vocalist Joey Florence. He may squeal a bit too often when he sings, but his delivery shouldn’t offend glam fans. However, the poor production has almost stripped the band of a bottom end and the drums have lost any power they may have had.

With a moniker like Cream Pie, you don’t have to be Einstein to figure out what the lyrics will be about. And because English isn’t their native language, some of the phrases are amusing. Take “Electric Blue” for instance, a song with a great lead guitar that is about a young boy discovering women, only to also ‘discover’ “a strange white liquid in his pants”!! I’m not making this stuff up, and am having trouble not bursting out laughing.

In this day and age, there is no excuse for a sound quality such as this, so I’m going to reserve judgment on Cream Pie until they enter the studio and record their music properly. Only then will we hear what this band is truly capable of.