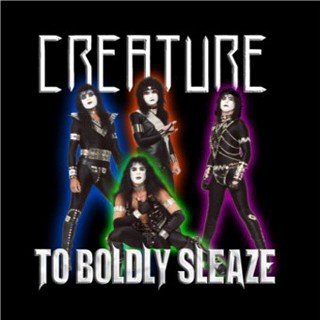 Review:
For the most part image played a huge role in the entire hair metal scene, and while some groups were content to raid their mother’s make-up drawer others were determined to venture into even stranger directions. Creature was one of those bands, a Hollywood outfit that took equal amounts of KISS and Dr. Frank-N-Furter and mixed it with an outrageous stage show referred to as the ‘Rage in the Cage’.

It was the mid-’80s, a time when ridiculous over-the-top spectacles were commonplace, and Creature dove in head first. With their image the KISS comparisons were unavoidable, and securing the talents of manager Bill Aucoin only fueled the fires, but Creatures‘ music was closer to what Cinderella and Britny Fox would take to the bank around the same time. Of course you could easily argue that Creature were all style and no substance, but I have to admit some of these songs are rather catchy.

“All Night Long” begins the festivities with squealing vocals, pounding rhythms, and an extended ‘look at me’ guitar solo. It’s the perfect way to kick things off, but it would be the next two tracks that display Creature‘s best work. “Take Me Shake Me” is pure ’80s sleaze that finds vocalist Billy B Nasty growling and screaming throughout, even barking over top the gang vocals during the chorus. As cool as that song is “Too Late For Love” has to be my favorite on To Boldly Sleaze — to me this sounds exactly like something you’d find on the pre-Night Song Cinderella demos, only with a darker vibe.

From there on Creature pretty much stick to the same formula. “No Way Out” has an interesting guitar sound mixed with some demonic tones, but the vocals are too extreme at times. The thin production kinda kills the next two tracks even if they are slightly more radio friendly. Things improve during “Shock The World”, an ’80s metal anthem that was probably one of the highlights of the live show, and the closing “Jump Shout Scream It Out” which ventures into arena rock territory and even contains a sing-a-long chorus. The final four songs, billed as bonus tracks, are slightly watered down — I get the feeling these compositions were Creature‘s final attempt at success and therefore lack some of the viciousness found on the rest of the disc.

Creature was a B-movie come to life, and like most low-budget horror movies there is a certain laughable charm about the band. They were spawned from a time when hard rock bands were throwing everything against the wall to see what would stick. In the end fame and fortune eluded Creature, but I bet they have a lot of great memories and scandalous stories to tell.