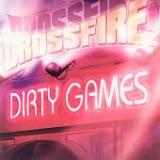 Review:
From reading their myspace page, it seems the Israeli band Crossfire have had a fairly checkered and varied career – from doing Guns N’Roses tribute shows to performing in the Israeli pre Eurovision contest. Formed in 2000 it has taken until 2007 for Crossfire to get their debut album out and thanks to Perris Records here it is, and it seems like it was worth the wait.

Crossfire say their influences are 80s! 80s! 80s! and that isn’t far from the truth. The first thing I notice is lots of keyboards, but it works perfectly, especially on the first song “Heartbreaker”. Second is that I love Rikki Reckless‘s voice, it’s not too polished and it can go from gritty to soaring to great heights. Thirdly, can Jessy Bullet play guitar or what? He burns up the guitar so much that it probably lets off smoke.

It may be simple stuff, but not everyone can do it well and effectively. On Dirty Games Crossfire have managed to combine good vocals, great riffs, heavy bass, alluring verses and killer choruses and they kick ass doing it.

The highlights are “Running Away”, “Feel The Heat (Tonight)”, “Never Give It Up” and “Dirty Game” which all sound like they are straight out of 1989 – but it’s all great. The only song that doesn’t light my fire is “All I Need”. This is the kind of lovey-dovey power ballad, with the equally saccharine lyrics to match, which make me want to induce vomiting. I picture people at concerts swaying and bringing out their lighters. That isn’t to say it’s a bad song, it just isn’t my kind of thing, but the more romantic saps amongst you will probably love it.

This is fun melodic rock that has captured the 80s spirit along the lines of early Def Leppard and Firehouse. 2007 was a fantastic year of new releases for fans of glam/sleaze/hard rock, whatever you want to label it, and Crossfire‘s Dirty Games is no exception.