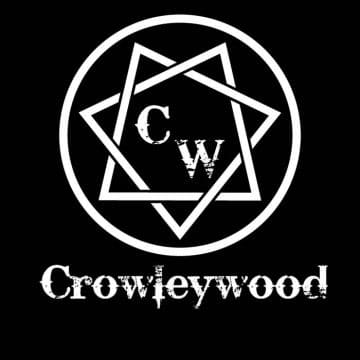 Review:
I love getting EPs from new bands just starting out. The energy is raw, the production simple and gritty, and more often than not, the music is intense, even if it’s not particularly original. The downside is that the production is simple and gritty, bands typically lack songwriting maturity or experience, and four songs can be not enough to get a real feel for future potential.

Crowleywood is an interesting name for this Argentinian band that has only been together for 18 months. It is a mash-up of Aleister Crowley, the 19th century mystic, occultist, and magician; and the ugly half of Hollywood hiding under the bright lights and body glitter. The band refers to influences ranging from Sixx:A.M. to Marilyn Manson, to Velvet Revolver. All I can say is there is a serious Axl Rose meets Scott Weiland sound to the vocals.

I can clearly hear Weiland’s Velvet Revolver work such as found on “Set Me Free” during the opening song “Die 4 Me.” The songwriting obviously relies heavily on mimicking the Slash style of power intros, catchy chorus hooks, and little interesting flourishes here and there. “The Devil Inside” opens, on the other hand, with a soundbite, in the same vein as Rob Zombie. I’m expecting an industrial style track but get hit with a pretty good riff.  Slash again. But for some reason, Crowleywood decide to lose all momentum and go with a very mellow and uninspired verse structure. They’re trying to pack too many creative elements into four minutes, which is too bad.  This is especially since I love the down tuned guitar bridge leading to the solo.

Another soundbite, “You’re a dirty girl, just like me” opens the third track “Dirty.” Kicking off with a nasty hybrid riff of ’80s glam and 2000s metal, I’m getting into it. But just like “The Devil Inside”, “Dirty” suffers from too many ideas. The song structure could easily be broken into two, maybe three other interesting concepts and potential new tracks. The fourth and final selection is “Bad Dream.” I love the bass/drum groove, and singer Gabriel Hazz really pulls off Axl, in both the low and mid-range registers.

Crowleywood have issued an EP, or more like a demo, that does show off quality musicianship, excellent vocals, and the band’s ability to combine different sleaze eras into one package. Unfortunately, I feel that package should have been eight songs or so in length to give a better feel of the group’s potential. I have a great deal of respect for bands that go balls out and put it all on the line. Crowleywood have serious potential and, as they develop as a band — no doubt they will do well. I look forward to hearing their first full-length release.

Crowleywood‘s “The Devil Inside” song: