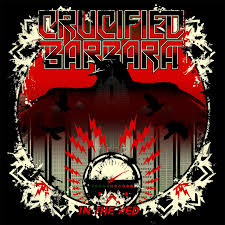 CRUCIFIED BARBARA
IN THE RED
Released on September 10, 2014 (Despotz Records)

Review:
Although I have known about Crucified Barbara for a long time, I have never really got into their music given that I considered that there were many better sounding female fronted metal bands emanating from Sweden including Sister Sin and Thundermother. I think that the raunchy sounding voice of Crucified Barbara‘s lead singer Mia probably kept me away. After all, while there are many male vocalists with gruff voices, there are not that many on the female side. In any case, with Crucified Barbara touring North America with the iconic female band Girlschool, I decided to familiarize myself with the Swedish rockers’ music by purchasing their last two releases The Midnight Chase and In The Red. With time not on my side, I ended up mostly just listening to the band’s latest release In The Red.

At first, I was not enamoured by any means with In The Red but by the time that the Swedish rockers’ Toronto concert date rolled along, which I unfortunately ended up missing, and after playing the record multiple times, I really like a lot of the songs. That being said, more melody would go a long way to making certain songs a lot better. This is also despite Mia‘s rough and gritty vocal delivery which at times sounds more like she is speaking than singing. However, the more that I listen to In The Red, the more that I am getting used to her raunchy voice which pales in comparison to her female counterparts such as Sister Sin‘s Liv Jagrell. I don’t usually notice the drumming on records that much but Nicki‘s drumming feels spot on. In fact, musically the rhytym section of bassist Ida and drummer Nicki along with Klara‘s guitar work provide a solid framework for Crucified Barbara‘s heavy metal sound.

My favorite tracks on Crucified Barbara’s In The Red are the album opener and anthem “I Sell My Kids For Rock’N’Roll”, the Iron Maiden Powerslave era guitar riff influenced “Do You Want Me”, the slower paced but catchy “Electric Sky” — which will compel you to sing along during the chorus and which I think is the best track by far — and the more melodic “Follow The Stream”. Tracks that I could live without are specifically “To Kill A Man” with its rather dull slowed down chorus and generally tracks four to eight which are forgettable as a whole. In other words, every time I listen to In The Red and despite “To Kill A Man” being the second track, I am all pumped up from listening to “I Sell My Kids For Rock ‘N’ Roll” and especially “Electric Sky” before the next five tracks go by largely unnoticed and the record ends with a bang with the three last songs consisting of “Finders Keepers”, “Do You Want Me” and “Follow The Stream”.

At the end, I am glad that I listened to In The Red a few more times due to the upcoming Crucified Barbara / Girlschool in Toronto because had I stopped listening to it after the first two or three disappointing first listens. In The Red would be gathering dust in my CD collection likely for the rest of my life. As it turns out, Crucified Barbara‘s In The Red simply requires numerous listens to warm up to it. Whether lots of people listening to the record will give it such a long auditioning process remains to be seen. I know that fellow Sleaze Roxx writer Mark Hovarth likely will not be one of them since he recently advised me that he listened to In The Red twice but it did not really grab him…