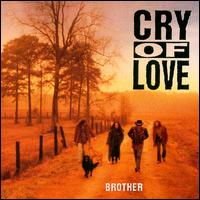 Review:
Cry Of Love was formed in the early 90’s, a time when grunge was starting to take over. They had a style of hard rock that would have fit in well with the 70’s rock scene, not far removed from bands like Bad Company. This album was a surprise success during a time when grunge was at its peak, rock radio success was made possible by singles like “Bad Thing”, “Too Cold In The Winter” and “Peace Pipe” (#1 Mainstream Rock). Cry Of Love also got an opening slot for ZZ Top, which should have made them superstars. But a change in lead singers, from Kelly Holland to Robert Mason (Lynch Mob), and a four year gap between albums (Diamonds & Debris, 1997) killed their momentum.

1) “Highway Jones” starts out with lead guitar vibrato similar to Jimi Hendrix, and a guitar riff with a very 70’s tone. I think this band may have influenced King Karma, because I was listening to that not too long ago after getting this, and I’m like “This sounds like Cry Of Love.” Overall a very good song.
Score: 8/10

2) “Pretty As You Please” although released in the early 90’s reminds one of a time when what you needed was to sound good to make it in the music scene, not look good. We sort of had that in the 90’s, but along with that, you had to sound like shit and look like you spent the night in a fuckin’ dumpster.
Score: 9/10

3) Starts out with a drum fill, then only vocals and drums, “Bad Thing” tells us what a bad thing it really is that Cry Of Love never became superstars. “No more of a bad, bad thing” is the line in the chorus. I can’t help but notice it bears a striking resemblance to Bad Company‘s “Can’t Get Enough Of Your Love.”
Score: 8/10

4) “Too Cold In The Winter” is a song with a title that tells me something that is all too true. Well anyway, the song is sort of mellow compared to the first three songs, I wouldn’t really call it a ballad though. More of a slightly mellow rocker. The solo is pretty memorable, works with the song rather nicely.
Score: 8/10

5) “Hand Me Down” is a slow rocker, which is a little harder than “Too Cold In The Winter”. It’s a rather good song, I wouldn’t say it’s awesome, but I would say it is pretty damn good.
Score: 9/10

6) “Gotta Love Me” starts out with a guitar tone VERY reminiscent of the mid-70’s. I’ve been on kind of 70’s rock n’ roll fix, so that keeps the points up with this song, plus this a rather rockin’ song.
Score: 8/10

7) “Carnival” doesn’t really grab me that much. It’s not a bad song, but compared to the last six songs, this is kind of a loser. The solo wows you though I will say, but overall, as I said, this song doesn’t have what the first six tunes have had.
Score: 8/10

8) “Drive It Home” is an overall ok song that kinda suffers from the same thing as “Carnival”, overall not the best song, but a solo that wows you.
Score: 8/10

9) Now we’re at the best song on the album by far. That song is called “Peace Pipe”, which considering this was one of their singles, should have propelled them to stardom! After the solo a few seconds later there’s a five second pause, then Kelly yells “Burn down the sacred ground!” This song is an absolute MASTERPIECE!
Score: 10/10

10) “Saving Grace” keeps the momentum of “Peace Pipe” going. It starts out with a very bluesy guitar intro, then gets very mellow in the verse. This is the only ballad on the album, and I will say the album is finished out nicely.
Score: 9/10

Cry Of Love has a very impressive debut album. It’s not the greatest CD you’ll ever hear, but it is one that will be a staple in your CD collection. In 1997, they released a sophomore album titled Diamonds & Debris which I’ve never heard, but I hear it’s rather good. Kelly Holland left in 1994 and the singer on their sophomore album was Robert Mason who I enjoyed in Lynch Mob, so I’ll be on the lookout for Cry Of Love‘s second album.

Essential For Fans Of: King Karma, Bad Company, The Black Crowes and Free.