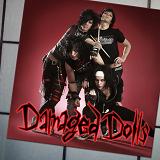 Review:
The Swedish scene for bands that adopt the 80’s sleaze look and play an updated sound of the same style is thriving. You could almost say that there is a new band born each week. Damaged Dolls are one of these bands.

To stand out from the crowd the only thing that counts are strong songs, and I gotta say these guys have the feel for melodies which grab your attention. The three songs presented on their new demo sound a lot like Crashdiet, although not (yet?) reaching the same songwriting-level.

The singer at times has the exact same raspy voice as Quiet Riot‘s Kevin DuBrow (R.I.P.), which to my ears is a definite plus. Unfortunately I just saw on their webpage that vocalist Holm has left the band and that they are now looking for a new singer! While “Kill Me For Fun” and “Right Between The Eyes” tend to hit more into the aggressive vein, “Bad Boy Gigolo” is a fun party-anthem and for me the best of the presented songs.

Well what can I say, what we’ve got here is another very promising Swedish sleaze-band, of which we’re hopefully going to hear a lot more. This EP makes me wonder what these guys can deliver with a better-sounding production and a full-length record. Damaged Dolls are definitely worth checking out and you can download this EP at their website!