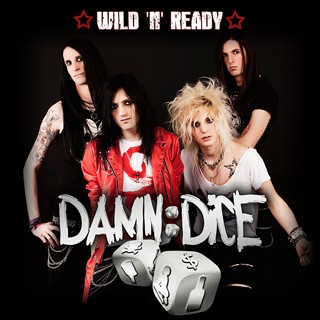 Review:
I’ve been a fan of Damn Dice for about three years now, and I must say their debut EP Wild ‘N’ Ready is a raucous ass-kicking blend of ball busting rock ‘n’ roll with great vocals and musical hooks, and also killer melodies.

The six song EP gets straight to the point with “Bang Your Head”, a hard rocker with a bridge that holds back the mayhem of the chorus. This song will send you into a mesmerizing fury of headbanging, no matter where you are, and the solo executed by lead axeman Wallis is incredible. “Caught In The Ride” is top notch as well — with very inspiring words, Alex‘s voice is soaring and the sing along melodies are great. “Take The Fight” is anthemic and also inspiring, with great vocals, an ass-kicking guitar riff, frantic drums, and backing vocals and harmonies that are once again a perfect blend. Heavy and rocking with a sense of melody, the song is about standing up for yourself and not taking people’s shit.

“Down” has varied a little bit over the last few years, but is now perfected. One of my favorite tracks, it is another anthemic rocker with a perfect guitar solo. “Heart On The Run” is probably my favorite song on the album — the harmonies, guitar work, and lyrics describe most of the girls I’ve dated, so it has that personal connection to it. The final track “Wild Into The Night” is a great party song, and coming from these guys, I believe every word as truth — it is very decadent with a little hint of darkness to it.

The one thing I have to say is that Damn Dice do not sound like anyone out there — they have their own sound and style. They’ve been part of the London sleaze scene and definitely show no signs of stopping. Wild ‘N’ Ready is an incredible EP, and anyone who says ’80s influenced hard rock music is dead must hear Damn Dice. This EP cannot be played unless it’s played loud!