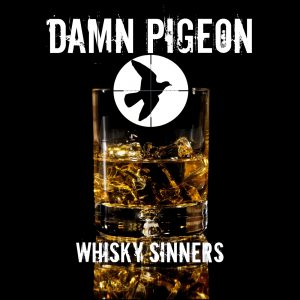 Review:
Damn Pigeon are one of those bands you can’t believe you’ve just discovered.  Hailing from a little town just outside London, Ontario in Canada, they formed in or about 2009 and released their first studio album (and wonderfully titled) Dismal Reviews. Unfortunately, founding member and singer Steve Phillips died shortly after recording the album, so there was no touring or support to follow. After several months off, and auditioning new singers, Damn Pigeon welcomed former Syre singer Doug Weir into the mix.

Now, some of you oldies like me might remember the ’80s Canadian hard rock band Syre. Check out this link for more on Syre.  They were about a half step down from the likes of Helix, Lee Aaron, and Anvil in terms of overall popularity and name recognition, but did get signed to a major label and released a few hits. Damn Pigeon‘s sound and style can be defined as modern Syre. Damn Pigeon’s second release Re-Coop in 2014 was full of cheeky fun and featured a number of stylistic departures for the band, showcasing their versatility. Re-Coop was met with good reviews. Songs from the record garnered broadcast and iNet radio airplay in some 28 countries around the world.

All of which brings us to Whisky Sinners. I think I will use many comparisons to other bands in this review. That’s not to say the music is derivative by any means, but simply a way for me to describe what I’m hearing stylistically. For example, the lead off track “Starlight” is flat out Skid Row, until the bridge, which has great vocal harmonies and a very good guitar line. “The Night In You” has a bit of Sixx AM and a dash of Scorpions. “Haunted” is a heavier track, but with interesting sonic harmonies and an innovative drum line. I’m hearing everything from Alice in Chains to early Our Lady Peace (Naveed era).

“Dreaming” is a bit more whimsical, with a great solo section that would make April Wine proud. “Whisky Sinners” is again Scorpion-esque as is “Pound” — both solid guitar rock with excellent vocals. “Killswitch” is one of those things that is not like the other, sounding more like latter day Judas Priest. Not bad, just that it stands out due to its heavier sound. “Tense & Wired” — I can only describe as Pink Floyd without the drugs to take the edge off.  As the song develops, it gets into I Mother Earth territory. It too, is an experiment that I’m not sure belongs, but it is well worth the listen. “Second Hand Superman,” “She’s Like A Drug” and “Rise” all have strong sleaze-based guitar rock. Finally, I do have to mention “Stripper Crotch”… and yes, it’s as slimy as you think. It would be perfect on the next Steel Panther album.

I was fascinated by what I was hearing on Whisky Sinners, so I caught up with bassist Steve Proud to talk about how it was recorded.  Steve told me “The band is basically about five guys who like to get together to write songs on Tuesday nights. We write collectively and do a lot of recording at our rehearsals. An idea is presented, then thrown into The Pigeon Blender and roughly recorded. Joe sends the recordings out by email to us, and we let them gestate during the following week. When one of us has an additional idea for the song, we explore it during the next jam. We rarely know how a particular song is going to turn out. It’s all very good fun, really…” It sure is Steve, really good fun.  thanks for your conversation.  MAPL all the way boys!

There’s not much out there to sample for Whisky Sinners, but try CD Baby or Amazon for a taste.  Below is a song from Re-Coop that Steve Proud acknowledges is “In questionable taste, and with sketchy talent – we know. ”  This is not their best work, but trust me, it’s worth the time to check out Damn Pigeon.