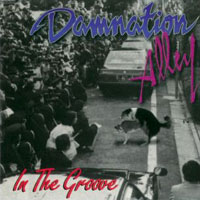 Review:
If you look inside an old copy of Rock City News you may see an advertisement for Damnation Alley. Like so many Sunset Strip bands in the early 90’s, they faded without a trace — but unlike many of their peers, these guys came across superb on album, as shown on In The Groove.

In The Groove is a four-song collection of demos. But unlike most demo collections, this one has a production that rivals that of major label artists. This is pure sleaze rock, bringing back memories of Motley Crue, Skid Row and the Sea Hags. Vocalist Lance HaunRogue is a rougher version of Vince Neil, and at times reminding me of Ron Yocom.

There isn’t a bad song on the disc (with “Seduction Sister” being the best), and while it might not be breaking any new ground, I never bought into the fable that a band had to be original to be great. With so many Sunset Strip bands trying to break out in the 90’s, Damnation Alley is one that actually lived up to the Strip’s hype. Highly recommended copies can be found at www.roguecreations.com.