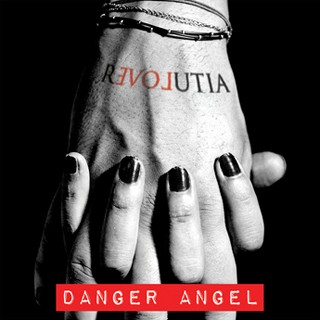 Review:
Here we have the brand new CD release by Danger Angel, entitled Revolutia, on Perris Records. This is my first time hearing this Greek band, who released their self-titled debut three years ago, and right after the opening instrumental it’s clear they are bringing catchy choruses and a style not uncommon to a modern day Loverboy — which is a good thing.

The first full song, “One Hit In The Night”, is classic ’80s arena sing along rock. I’m guessing the producer had that era and sound in mind as I hear sing-able choruses, keyboards, and soaring vocals from new singer M.T. Why isn’t this song on mainstream rock radio? Oh, and did I mention the record was produced by Jeff Scott Soto, who was briefly the lead singer of Journey prior to Arnel Pineda. All the great ’80s production touches are on this album, it’s truly a time-warp. Can Soto go back and remix/re-master all the old CMC International CD’s by some of our beloved bands and make them sound this good? That label was notorious for its lack of production quality.

Next up is “When I’m Gone”, which is another outstanding example of the production work — it’s breathtaking. I hear a lot of Kip Winger in Danger Angel‘s singer on this song and I’m getting the same vibe I did listening to Winger‘s masterful release Pull (I suddenly want to get out my copy of that underrated album), for which this song would fit nicely on. My advice to anyone buying Revolutia — I’m three songs in and I’m going to leave this on my MP3 for a very long time! “Not An Angel” would remind you slightly of Manowar from their Kings Of Metal era, which, again, is another great band to be compared to. It’s neat that every song on Revolutia has a different influence — that’s a high point here.

Someone obviously taught these guys how to write catchy hooks and choruses as everything here is perfect. During “Falling” I hear bits and pieces of the band Within Temptation and their hit song “Shot In The Dark” — they should tour together… someone make that happen. This might be one of the best albums I’ve heard all year! As I said earlier, the producer is the real story here and I dare anyone to call this ‘hair-metal’, this is just amazing songwriting mixed with flawless production, and just the right influences throughout to let you know they know their stuff. This band deserves street cred.

“Decadence” is another example of Jeff Scott Soto putting on a producer’s clinic for the listener. The arrangements of the songs are the other real standout and the keyboards are a perfect addition. The light hearted “Dead By Christmas” may tread too close to The Darkness territory for me, but it’s still alright, just not as epic as the rest of the album, but on the other hand “King Of Thieves” is better than anything on Geoff Tate‘s CD of virtually the same name.

Overall Revolutia appears to have been unearthed in a time capsule from 1988, re-mastered and re-released in 2013. Everything you could ever want from a truly flashback-inspired sound is right here, so why isn’t this in the Billboard Top 10? The band’s Facebook page has about 5,000 likes, but truly needs more. Paying homage to artists as diverse as Winger, Within Temptation, Journey, and Manowar, with some of the best production work I’ve ever heard, makes this a must buy album.