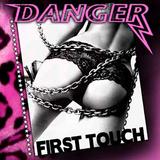 Review:
Some people don’t think cover art is important, and sometimes it’s not. But if I’m not familiar with a band often the cover of a CD is what makes me want to pick it up or ignore it, or in today’s climate of the internet, makes me curious enough to check out their website. Danger‘s cover on their six song EP First Touch is one that would probably catch your eye. With a glam look that rivals the best, it’s really no surprise that these pretty boy sleaze rockers with big hair hail from Sweden.

Title track “First Touch” is nothing mind-blowing but it’s good enough straight ahead rock. “Miss Money” and “Hey You” are both catchy numbers, albeit pretty simple, but they are both fun and likeable. While Danger don’t really sound like Y&T, “California Red” has the same good time vibe as Y&T‘s “Summertime Girls” and is probably my favorite song on First Touch, along with “Shove It”, which is a bit harder and grittier.

These guys have great vocals and although the music sounds a bit tinny at times, that’s probably nothing that a bit of production tweaking won’t fix.

Danger sound a bit like their fellow countrymen Crashdiet and Loud ‘N’ Nasty, but more so they remind me of L.A. band Dirty Penny, which isn’t a bad thing in my books. There is not much in the way of ground breaking originality here and they probably won’t set the world on fire, but First Touch is very enjoyable. With a lot of better-than-average bands coming out of the woodwork it seems rock isn’t dead after all, it’s just becoming more and more apparent that most of it packed up its bags and moved to Sweden.