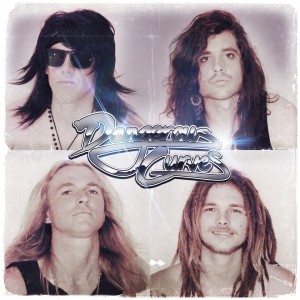 Review:
“Blow My Whistle”… “Come For Me”… Have Steel Panther already come out with a new album after their live acoustic album Live From Lexxi’s Mom’s Garage? The answer is no. These song titles are coming from a new Australian glam metal band called Dangerous Curves who appear to be borrowing a little from everyone — but hey, isn’t every band doing that? I have already mentioned the song titles that would make Satchel and company proud. The cover reminds me a lot of the one for Poison‘s debut album Look What The Cat Dragged In with the white background and four band members’  heads but without the “men who look like women” head shots. The ’80s style of hair metal music that this Australian band plays is also quite familiar sounding and makes you feel like you’ve heard these songs before.

I have been listening to Dangerous Curves for the last couple of weeks (thanks to an advance copy from the band — thank you) and in a nutshell, although I like all the songs on the five-song EP, there is no tune that jumps up at me to take notice or that I really remember after the album is over. There lies the problem with Dangerous Curves‘ offering on their debut self-titled EP. The songs are pretty good but aren’t really catchy enough for me to remember any of them. The guitar work from Cammy Paul is good but there does not seem to be any real memorable guitar riffs as Paul throws in some guitar noodling wherever he can fit it in and I am not crazy about the guitar sound overall. Singer Kym Britten‘s singing is alright but he’s no Rob Halford or even Phil Lewis for that matter. The drums on Dangerous Curves sound like you are hearing the band in a live setting which is a good and bad thing. While I always enjoy the live feel on songs, a little more polish would have been nice for the songs to stick out a little more. “Blow My Whistle” is my favorite out of the five songs that Dangerous Curves have to offer and seems to be the song that is making the most waves for the band.

Perhaps it’s a sign for me to stop listening to the Dangerous Curves EP because my CD player has gotten stuck two times in a row now when I play the song “Got Me Runnin’.” Seriously speaking, Dangerous Curves offer some good albeit not that memorable songs that will likely take you back to the beloved late ’80s / early ’90s hair metal era. If you’re interested in obtaining the EP, I suggest contacting the band directly.