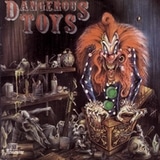 Review:
When this record originally came out back in 1989, Dangerous Toys were seen as one of the few hair-metal bands trying to do things differently.

Sure some songs, like “Sport’n a Woody” and “Ten Boots (Stompin’)”, sound totally dated today, but others still sound as strong as they did twenty years ago. In my opinion, “Scared” is one of the best hair-metal songs of the whole genre and “Feels Like A Hammer” is one of the stronger ballads that had ever been recorded up to that point.

While the band’s shtick seems laughable now, they were hip as shit when they came out, and fortunately a lot of the band’s songwriting is able to stand up to the years. When people look back on hair-metal in about fifty years, they’ll look back at Dangerous Toys self-titled debut and say, “Wow, now those guys were different.” Listening to certain songs on the record will take people back and that’s what these guys should be remembered for.

Reviewed by Pete Crigler for Sleaze Roxx, May 2009.