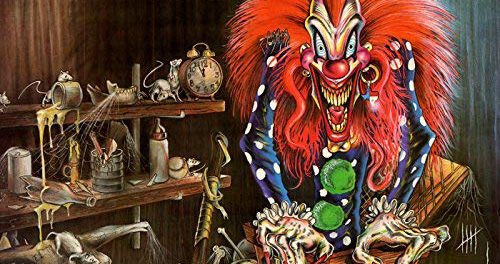 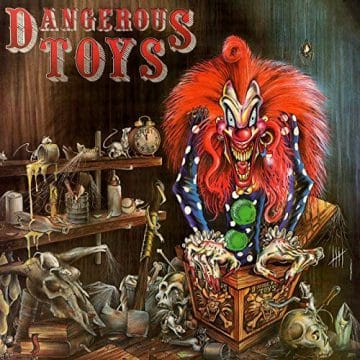 Review:
When I think back to the time that I discovered Dangerous Toys’ self titled debut album, I can specifically remember my local music store having a Columbia / CBS Records cardboard display promoting those companies’ recent musical releases. From memory, those albums were of course Dangerous Toys’ debut, Love/Hate’s Blackout In The Red Room, Ozzy Osbourne’s Just Say Ozzy and I think an album by a band called The Front. I do remember the album had a yellow and blue cover. Anyway, this would indicate that the year was at least 1990, some time after the Dangerous Toys release.

I had ventured into the music store to purchase Love/Hate’s Blackout In The Red Room after hearing the title track and “Why Do You Think They Call It Dope?”. However, another album also caught my eye purely because of a crazy looking clown / jack-in-the-box type thing adorning the cover artwork. I perused the song titles and thought it sounded fun. So I took a chance and purchased the album. If you are like me, and occasionally go out on a whim by purchasing an album without ever hearing the band before, or even knowing who they are, then you would understand the rush and anticipation it gives you — a musical lucky dip if you will. Over the years, I have had varying degrees of success using this method and Dangerous Toys’ self titled album is definitely one of those success stories.

“Teas’n, Pleas’n” starts the album off in fine fashion with a simple riff bringing the groove, before the drums hit and Jason McMaster’s banshee howl sends a chill up your spine. The ascending verse guitar chords are also really cool and lyrically, “Teas’n, Pleas’n” gives us the first sample of the tongue-in-cheek humor that will be prevalent on the rest of the album. The next song “Scared” is dedicated to Alice Cooper and continues with the simple straight up rock riffs. McMaster’s vocals are more subdued this time around showing us that he has the ability to transition between styles to suit the song, or even apply multiple styles into the one song, which will occur later on the album. Of note, Mike Watson’s bass playing on the song, as well as on the whole album is great. If you listen really closely, you will hear little nuances that compliment the guitars. It’s not often that bass players get more credit than guitarists, but on “Scared”, Watson is playing and doing so much more than the guitars that it is worth a special mention.

One of my favorites — “Bones In The Gutter” — another great rocker, is next and tells the story of someone being engaged to perform a hit on a ‘fatted calf — a rich fat lady with diamonds and rocks’. Here in Australia, we use a lot of slang to describe things and I would probably credit Dangerous Toys’ lyrics with introducing me to American slang and euphemisms. The lyrics are so clever that you cannot determine whether to take them seriously with a bit of menace or whether they are supposed to be comedy gold. Either way, I love them. “Take Me Drunk” starts with an ascending and descending riff before a wailing guitar lead break takes us to the verse. Sleazy lyrics about the ability of alcohol to change a girls mind provide more humorous anecdotes possibly based on real life band experiences.

Next is “Feels Like A Hammer” which would be classified as the album’s ballad. Simple guitar chords and mid-tempo drums play second fiddle to McMaster’s vocals which this time around, are presented in a style somewhere between his normal singing voice and his high pitched shrieking. As much as I hate to say it, “Feels Like A Hammer” is my least favorite track on the album and ultimately lacks any real energy, making it quite boring. Thankfully, “Sport’n A Woody” takes us back to energetic, straight up rocking with fun lyrics. A pounding drum intro and another great riff with lead break, takes us on an enjoyable romp with a lyrical topic matter that has definitely influenced the likes of Steel Panther. Six songs down on the album and I can state that as a lyricist, Jason McMaster is a dirty little bastard who has his mind firmly in the gutter and a vocabulary entrenched in innuendo. I love it.

For me, the highlight of the album and possibly my most favorite song overall by Dangerous Toysis track seven, “Queen Of The Nile”. All humor aside, “Queen Of The Nile” should have been released as a single and I am bewildered why it never got that opportunity. The lyrics are commercially accessible and the main riff is just phenomenal with its mixture of chords and arpeggio. The guitar solos are great, the lyrical topic matter is a welcome change of pace and the song ending has McMaster channeling a bit of Axl Rose. The next song is “Outlaw” which bursts out of the gates and contains more lyrical genius. The guitars during the verses have always impressed me on this song. One guitar plays a chugging power chord structure while the second guitar squeals its own riff underlining the vocals. Everything just fits so perfectly. Backing vocals are also used well on the song, brought forward in the mix when necessary but mainly providing more depth to McMaster’s vocals in the background on the choruses.

“Here Comes Trouble” starts off with a nice guitar arpeggio giving us the impression that we might be in for another ballad, but the song quickly morphs into another straight up rocker. A short return to a variation arpeggio prior to the guitar solo provides a welcome deviation from the typical song structure. The album is rounded off by “Ten Boots (Stompin’)” and “That Dog.” “Ten Boots (Stompin’)” is another one of my favorites. How can you go wrong when writing an ode to your favorite pair of shoes? The guys from Dangerous Toys are from Texas so most likely they were born with cowboy boots on, completely justifying their usage unlike the glam rock fraternity. “That Dog” closes out the album with another rollicking rock song full of cool riffs and great lead breaks.

If I had to describe Dangerous Toys’ sound in one word, it would probably be ‘gritty’. The debut album isn’t overly produced and even though there were several songs that had video clips played regularly on MTV, the band didn’t really fit in with the commercialized glam bands that were big at the time. That appealed to be because my tastes started to head towards heavier music and Dangerous Toys provided a somewhat midpoint transition to that. Vocalist Jason McMaster’s voice is an acquired taste, landing somewhere between a style similar to Axl Rose, Tom Keifer and Dizzy Dean Davidson. But when he is not screeching, his straight up singing voice is actually pretty good, with the layering of the vocals on the album providing a real fullness and warmth to the sound. Guitar wise, Scott Dalhover, who plays all the guitars on the album, absolutely kills it. From groovy riffs to frenetic solos and melodic nuances, he was definitely laying claim to becoming one of the next big names in guitar playing.

Unfortunately for Dangerous Toys, they appeared at the tail end of the ’80s when musical tastes were beginning to change, and a whole new genre of music was taking over the airwaves and MTV. By the ’90s, I was into bands like Megadeth and Slayer, but despite my defection from hard rock and glam, I remained a fan of Dangerous Toys and continued to pick up all of their subsequent releases.

Reviewed by Daz for Sleaze Roxx, May 2019