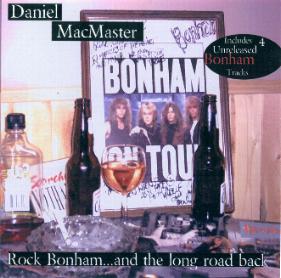 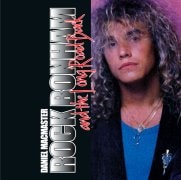 Review:
Many of you should remember the late 80s group Bonham and their hit single “Wait For You”, what you may not remember is that Daniel MacMaster was their frontman. After several years out of the spotlight Daniel has returned to bring some new (and old) music to fans of hard rock. Rock Bonham contains seven brand new tunes as well as four unreleased Bonham recordings, and the real surprise here is that the new material outshines the old!

Bonham was a rather slick and melodic band, so it is interesting to hear MacMaster take a more down-to-basics approach on his new material. In fact Daniel sounds almost exactly like Tesla‘s Jeff Keith here (and that is a compliment), something I hadn’t noticed before. “Bleeding Hearts Collide” starts things off with a huge sound and powerful chorus, proving right off the bat that MacMaster hasn’t lost a step. “Walk With Me” is the heaviest song represented and has a Tora Tora vibe to it, as does the earthier “1st In Line”. When you listen to the acoustic “Is She Falling” you will swear a rare undiscovered Tesla gem is being played, it is great.

The best of the new material however is “One Step Behind” – the gospel backing vocals really make it stand out and Daniel gives it his all. As for the previously unreleased Bonham material, while the songs are good, they don’t rank up there with the group’s best material. Plus with them being demos the sound/production (or lack of) leaves a bit to be desired – they have a very heavy bottom-end. But it is interesting to hear MacMaster doing his best Steven Tyler impression on “Great Confusion”.

Rock Bonham is being used to reintroduce Daniel MacMaster to rock fans, in anticipation of his upcoming solo release Never Ever Done. Judging by this album the solo CD should be one of the highlights of 2006. Isn’t it great when 80s rockers return and give fans exactly what they want! This album is available at www.suncityrecords.com and is worth every penny – the long hair may be gone but the voice isn’t.