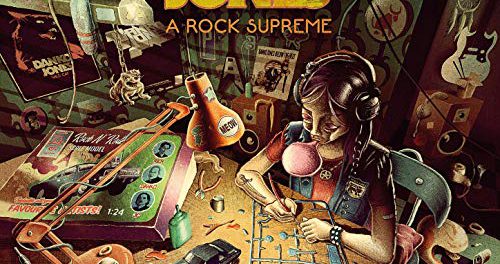 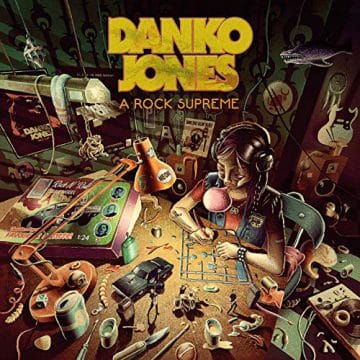 Review:
Toronto, Ontario, Canada based Danko Jones are at it again with their ninth studio album, A Rock Supreme. Founding members Jones and bassist John Calabrese are once again joined by Rich Knox to offer another kick ass album in the band’s most familiar style.

Like AC/DC, Bullet, or Airbourne, you know what to expect when listening to a new Danko Jones album. The band champions a pure bred rock and roll sound without flourish or extravagance. Powered by a one-two-three of hard guitars, complimentary rhythm section, and in your face vocals, A Rock Supreme is supremely rock.

It’s funny to hear a 20+ year veteran like Danko sing “I’m in a band and I love it” in the opening track, because I really do believe that’s the truth. The sense of fun and enjoyment shines throughout the song, and actually across each of the 11 tracks. “I Love Love” allows drummer Rich Knox to drive the intro/verse and, as usual, Danko’s vocals make the difference.

“Dance Dance Dance” is a slight departure from the norm, as a more melodic tune with something of a sing-along chorus.  Similarly, “Fists Up High” has a bit of Angus Young playfulness to the guitar line, and “You Got Today” is a Danko take on a Van Halen-type sound and feel. A bluesy swagger crossing “Ice Cream Man” with “Atomic Punk” maybe? Never mind the comparisons, it is a good song no matter what. “You Can’t Keep Us Down” and “Burn in Hell” are fist pumping, punk based experiences. Other tracks like “We’re Crazy”, “Party” and “Lipstick City” are typical guitar call and vocal response so common to all of Danko Jones’ past efforts.

If you were a fan of the band’s 1999 EP featuring “Bounce” or the 2002 single “Lovercall” as I was, not much has changed in the interim. Danko Jones are what they are, and what that is continues to be dependable, if not predictable, producers of infectious hard rock.

Reviewed by Metal Mike for Sleaze Roxx, May 2019

Official music video for our single “Dance Dance Dance” from our upcoming album “A Rock Supreme” out April 26th. We are excited to finally have Amir Chamdin …

Pre-order our upcoming album “A Rock Supreme” athttp://www.dankojones.com/—Subscribe to our channel here!http://bit.ly/DankoJonesYTsubscribe

Danko Jones – I’m In A Band (Official Audio With Lyrics)