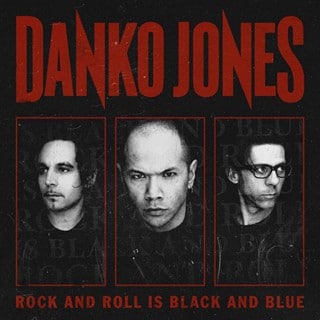 Review:
Rock And Roll Is Black And Blue is album number six for Canadian trio Danko Jones. Danko and the boys are known for their straight-up, in your face, no-frills rock ‘n’ roll and this one isn’t any different… or is it?

The answer to that question really depends where you are on the scale of ‘Dankoness’. If you’re from the old days then you’ll hear a lot of similar sounds and vibes on Rock And Roll Is Black And Blue, but if you discovered the band during their Never Too Loud or Below The Belt era then this may be a slight departure from your expectations. You see, old Danko is angry, crotch-grabbing, middle finger extending, swaggering, in your face music, while the newer stuff is… well basically the same, except with an apology after it. This album contains both, and as a result has the earlier attitude combined with a more mature sound and outlook. In other words, it’s great.

Kicking us off is “Terrified”, and a right bloody good song it is — it’s an immediately recognizable high energy swaggering number to get you going. “Get Up” follows and is a typical Danko Jones song that finds the singer wailing on about his girl dancing about — it’s catchy, though in a slightly annoying sort of way. “Legs” is another in the classic mode, though probably about a minute too long, which made me think of how much cooler it would have been if he was singing ‘breasts’… anyway I digress, alternative lyrics are not today’s review. “Just A Beautiful Day” is another high-paced, energetic, and catchy number and is followed by the brilliant swaggering attitude laden “I Don’t Care” which is absolutely essential listening! “You Wear Me Down” is a slower number to bring you back down, it’s there, but average at best, while “Type Of Girl” is filler. “Always Away” starts like an AC/DC song and to me sounds like it was written for festival crowds — it’s good but not great.

“Conceited” and is pure head-banging goodness and another classic sounding Danko Jones number. “Don’t Do This” is an old-school sounding track and again another really solid number while “The Masochist” pays testament to an older more punk like vibe — it has a high energy that makes you nod along with it. Now we come to the jewel in the crown, “I Believed In God”, an absolute belter of a song after you get past the intro, which in itself is amusing hearing Danko act as a preacher. This song has everything you need in it — it’s fast, catchy, funny and is a right good rock number that begs to be turned up loud. The end of “I Believed In God” is the reprise, classed as a song in its own right — fair enough, if you like a church organ fading out. Last but not least is “In Your Arms”, a solid but slightly depressing bonus track — which is why it’s last.

So do you buy Rock And Roll Is Black And Blue? Of course you do — it would be wrong of you not to part with your pennies for another slice of rock goodness. While you’re at it, treat yourself to the recently released Bring On The Mountain DVD for more of the same. Simple instructions for use… buy, play loud, and enjoy.