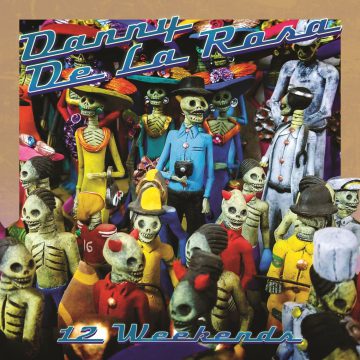 Review:
Being that I have always been a huge fan of the band Babylon A.D., I was very disappointed when it was announced that guitarist Danny De La Rosa would be leaving the band to pursue other facets in life. Then I thought, possibly there was going to be a solo career on the horizon.

You see a few years back I had met Danny at the Rock N’ Skull event in Pekin, Illinois. I was very intrigued by Danny’s style of play within the band. At that event, I was directly in front of Danny and I was so impressed with his playing. I felt that with Babylon A.D., the band’s music was the main focus so Danny’s playing was somewhat overshadowed by the great music that the band brought forth. After this meeting, I kept in contact with Danny and he did mention the fact that a solo album would be forthcoming at some point. Periodically, I would check in with Danny to see how things were coming along. Finally, here we are in 2020 and Danny De La Rosa’s solo release is upon us. Danny was kind enough to forward me a copy as he had also agreed to join me on my podcast, Non-Stop Rock Talk with Tyson Briden. That my friends is to happen very soon and be on the lookout for this great interview. I know — a shameless plug — but everybody’s doing it these days.

So here we are, 12 Weekends by Danny De La Rosa. What can we say about it? Well for those that have heard the first single, “Acid Flame”, the comparison to Babylon A.D. does not even fit into the equation. This is a song that stands all on its own. As for the rest of the album, the same can be said. This is an eclectic mixture of pop sensibilities with possibly influences from Cheap Trick and Ace Frehley. Danny actually mentioned to me that when I asked about his vocals. He commented that Babylon A.D. singer Derek Davis is such a professional vocalist that De La Rosa‘s vocals may not be as listener friendly as Davis‘, but it really works. In my eyes, it fits so well to what the music is. De La Rosa also explained that this is his first attempt at singing and he doesn’t consider himself a singer but needed to be able to express himself musically. This was the only way after a throat surgery.

The bottom line is that I love Danny’s vocals on this album. It’s got such character. That’s why I make the comparison to Ace Frehley as the former KISS guitarist has a distinct style all his own. I find that the track “Third Wheel Man” actually has the same feel of something that may have appeared on Frehley’s 1978 self-titled release. To me, that is just the perfect formula for success. Let’s be honest, in terms of Frehley’s solo material, that album was the best with of course, the 1987 release being a close second. Now, let’s not allow Ace Frehley to overshadow Danny De La Rosa’s extreme talent.

What I also get from this release is the fact that I can also make comparisons to what was happening in music in the late ’90s. Of course, the early ’90s was about self-loathing and staring at your shoes on-stage, but in the late ’90s, after the dust had settled, the haze of the Seattle scene had passed and many great pop-rock bands surfaced. This album has that feel and I think that is a good thing because frankly, I was deep in that music back in the late ’90s. “It’s Alright, It’s Okay” really gives the listener that ’90s sensibility without sounding dated. Within the track itself, De La Rosa gives the listener a chance to hear his true talent as he solos while his vocal stands over-top. There seems to be a tremolo effect on the guitar and that adds even more depth.

“The Secret” gives the listener another angle and really stands out to me. I love how the song starts so abruptly. De La Rosa creates a great background vocal within and it creates an amazing feel as well. Of course, it wouldn’t be Danny De La Rosa if slide guitar was not present somewhere on the album. It’s subtle, but fits perfectly. On “The Mirror”, I sense that Ace Frehley vibe again — well sort of. Most of us are familiar with the “Fractured Mirror” sequence, but this is not an instrumental, just a cool rocker. The main guitar riff takes the listener on a journey that seems to really feel like you’re running. As a runner myself, I can throw this on and have the perfect soundtrack to get my blood flowing.

As I have analyzed the first few tracks, it occurred to me that if I were to explain every track to you the reader, what would be the point of buying the album? I can’t give away too much. I know I am just like the Hollywood preview teaser. I am here to give you the best parts of the record. Honestly, there is too much for me to explain. You need to find out for yourself. So, as I close out, I must say, if you’re looking for a Babylon A.D. album, this is not it. You’ll have to wait for the next one, but if you’re feeling adventurous and looking for a great collection of rock songs with great pop sensibilities, this is the album for you. Fans of the late ’90s, Cheap Trick and Ace Frehley are sure to salivate over this release.