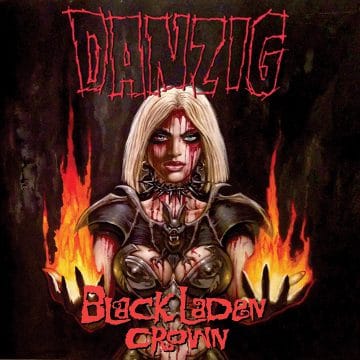 Review:
Let me start this review by stating that I am a big Glenn Danzig fan. So much so that I have the Danzig tribal skull tattooed on my arm. From the Misfits, to Samhain, to Danzig and even to Verotik, the comic book company that Glenn started so he could fulfill his twisted little fantasies, I have keenly followed everything he has ever done and released.

But like most people, I have a fondness for the era of 1988-1994 which spawned the fantastic Danzig 1 to 4 albums rather than everything that has followed those gems. That’s not to say that there haven’t been some great riffs and songs along the way. It’s just that the feel and image of the band seemed to shift direction from being evil and sinister to cartoonish and schlock. Regardless, fans like me would have picked up all the releases after the glory years just because it’s Danzig.

However, for us purists, it probably took us until 2002’s I Luciferi or 2004’s Circle Of Snakes to breathe a sigh of relief that Danzig were finally getting back on track and leaving the overly industrialized, compressed nu-metal sound behind. And getting back on track he did with 2010’s Deth Red Sabaoth which received many positive reviews.

Now we fast forward seven years and Danzig have released what I consider to be their 10th album, Black Laden Crown. So, is it as good as Deth Red Sabaoth? Yes and no. Is it different to Deth Red Sabaoth? Absolutely. Does it still sound like Danzig? Of course it does. No one sounds like Glenn.

Black Laden Crown opens with the title track which will immediately give you a feel for how the album will progress. The track is a slow chanting type song based around one riff with a few variations thrown in. The addition of some blended squealing guitar melodies breaks up the monotony to a point. The song is almost hypnotic in a way and some people might find themselves zoning out or falling asleep. I think Danzig foresaw this though and for that reason, the tempo of the song changes near the end to something a bit more upbeat and driving. Next is “Eyes Ripping Fire” which after a short slow tempo introduction quickly shifts into something more mid tempo and groovy. For me, this is one of the standout tracks on the album.

“Devil On Hwy 9” and “Last Ride” follow respectively and were the first songs released to the public as teasers for the albums release. “Devil On Hwy 9” is the fastest song on the album tempo wise and raised much debate online about Glenn’s vocal performance, the muffled guitar sound and the quality of the mixing which I will get into later. Those same comments were also unfairly made about “Last Ride” which is an enjoyable song nonetheless. “The Witching Hour” and “But A Nightmare” continue the mood of the album with the later ending with a frenetic cacophony of fast paced drumming and pinch harmonics. “Skulls & Daisies,” “Blackness Falls” and “Pull The Sun” round out the album with the same slow tempo and the common trait of each song being built around one major repetitive riff, which is layered with a squealing melody to add some much needed energy.

And therein lies what many people will find is the biggest problem with the album – the lack of energy. But really, does everything have to be fast paced and in your face? Can we not accept Black Laden Crown for what it is – a spooky doom driven album that borders on the edge of easy listening?

Glenn Danzig is 61 years old. He has been screaming his lungs out for 40 years now. Of course that is going to take its toll on anybody. Black Laden Crown excels in being exactly where it needs to be to suit Glenn’s current voice and vocal ability. The reality is we are no longer going to get the renowned Glenn Danzig banshee howl, which is a shame, but completely understandable if you are a realist. The Glenn Danzig of today has a power depleted voice and as far as I am concerned, he croons all over Black Laden Crown with great effect.

Now, let’s get into the much harped on about mixing and recording of the album, which is nothing new for any of Danzig’s prior releases. Yes, it has its short comings. But it astounds me as to why so many people (not even Danzig fans) are so focused on this aspect and not the actual artistic output. When did everyone become a musician or a music producer? I will be the first to admit that 2015’s Skeletons sounded pretty bad from a production point of view. But I listen to Danzig to hear songs and appreciate someone’s art. I don’t have to dissect how the music was recorded in order to simply enjoy the songs. Yeah I might be a fan boy, but I can still acknowledge when something is bad. I just choose not to dwell on it and move onto the next thing which is hopefully better. The old cliché still rings true – if you don’t like it, don’t listen to it and don’t buy it.

Black Laden Crown is a worthy addition to the Danzig catalog. It won’t win the band any new fans but it will quench the thirst of the existing fan base. I for one am thankful that Glenn is still capable of doing this. If the impending Elvis covers album is Danzig’s swansong, so be it. I am fine with that. He doesn’t owe me anything.

Saying that though, I do have three complaints to make about Black Laden Crown: