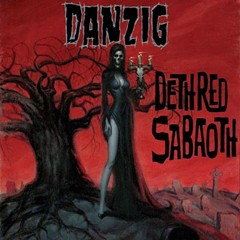 Review:
Six years after his last album Circle Of Snakes, Glenn Danzig returns with a new CD and a new incarnation of Danzig. The only returning member from the previous band, aside from ‘Evil Elvis’ himself, is Ministry and Prong guitarist Tommy Victor. Like the last record, Danzig‘s new album Deth Red Sabaoth isn’t part of the numbered series.

Deth Red Sabaoth is a return to form for Glenn Danzig as it is the closest he’s come to recapturing the sound of the classic era of the band. Tommy Victor is true to that classic sound as he summons his inner John Christ and delivers some hellacious riffs. Drummer Johnny Kelly can’t help himself and overplays a little on this album, but his lack of discipline is forgiven. Glenn himself sounds incredible — he’s back to form as he was on the first three Danzig albums. The standout tracks on the album are the opener “Hammer Of The Gods”, “Black Candy”, “Deth Red Moon” and “Ju Ju Bone”. If you’ve been waiting since 1994 for the Glenn Danzig of old to come around he finally has. If you didn’t know better you’d think these tracks were lifted from The Lost Tracks’ disc one.

While Glenn Danzig and company don’t top the classic Danzig trilogy, Deth Red Sabaoth is on par with Danzig 4.