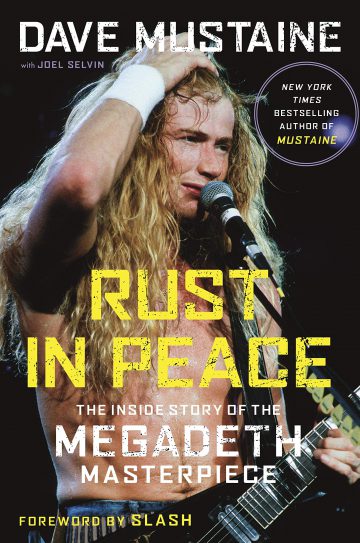 DAVE MUSTAINE WITH JOEL SELVIN
RUST IN PEACE: THE INSIDE STORY OF THE MEGADETH MASTERPIECE (BOOK)
September 8, 2020 (Hachette Books)

Review:
There have been three books that have knocked it out of the park recently. Books that you start reading and you can’t help continue reading until you’ve finished it. The first is Greg Prato’s Take It Off: KISS Truly Unmasked, Steve Gorman’s Hard To Handle: The Life And Death of The Black Crowes — A Memoir and now Rust In Peace: The Inside Story of The Megadeth Masterpiece. You’ve been warned if you have stuff to get done and you start reading Dave Mustaine’s new book, expect to get nothing done once you crack the book open. You’ll become a glutton for all things Megadeth. Dave with help from Joel Selvin have retold the story of the making of the fan favorite and the band’s magnum opus, Rust In Peace.

We knew the stories of Mustaine’s excess which ultimately got him thrown out of Metallica, as well as the drinking and drugging that took place from the formation of Megadeth right through 1988’s So Far, So Good…So What?. From all that you read in magazines going into Rust In Peace, the band was being sold to the base as a group that had cleaned up its act. Megadeth added drummer Nick Menza and guitarist Marty Friedman, the latter from the world of Mike Varney ‘shred.’ Mustaine and Ellefson were the core of the line-up going into Rust In Peace but what Friedman and Menza brought to the recording of the album, along with producer Mike Clink was invaluable.

Everything was firing on all cylinders as they say, but the band was falling apart in a world of excess with their alcohol and substances, primarily heroin. Megadeth were on top of the world as the book opened. Megadeth were part of 1988’s Monsters of Rock Festival in England and the band took the stage in front of 100,000+ fans. Mustaine notes that EVERYONE in the band was strung out on heroin. Incredible. There’s a great deal of this book dedicated to substance use, which you can judge whether or not this is ‘glorifying’ use of alcohol and drugs. I know that this type of talk would be frowned upon within the recovery community because it would fall under ‘war storying.’ The fact is there is no way to tell the tale without some of these outlandish tales.

I’m not going to give away any of the highlights, because I don’t want to spoil this book for you. Let me say that you get to learn about Clink’s level of participation on the album and about Menza and Friedman. Menza of course is now deceased having died on stage from a cardiac arrest in May of 2016, and Friedman until recent years, had done an about face to rock and metal and had been working on J-pop music in Japan where he now resides. There was a chance a few years ago when ALL of the participants were at the NAMM show. I got to meet and speak with Menza, Friedman and Ellefson. The line to meet Dave Mustaine as you can imagine was long and well, if you have ever been to NAMM, you know there’s a lot to see and standing around for hours to meet one person is crazy. Plus I have met Mustaine on a couple occasions the last being at Powell’s Books in Portland, Oregon when he was signing his first book Mustaine: A Heavy Metal Memoir. I asked all three what the chances were of that line-up getting back together again? Ellefson danced around the question. Friedman said, “I don’t know. I haven’t been approached about it.” Menza was a little more forthcoming saying, “We’re all here today. Wouldn’t that be great if we could work together again? I’d love to do it. What an album.” Menza was all smiles that week and as it turns out, he did in fact jam with  Mustaine and Ellefson days after that, but it didn’t result in a reunion.

This book tells all about the creation of one of the most heralded thrash metal albums that will have you glued to your seat and turning page after page until you’ve finished it. Go ahead and carve out a few hours of your weekend and tear into Rust In Peace: The Inside Story of The Megadeth Masterpiece. Sometimes, it’s okay to be a glutton.