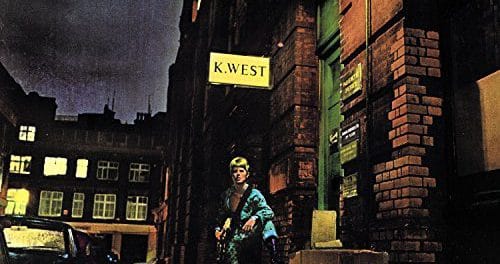 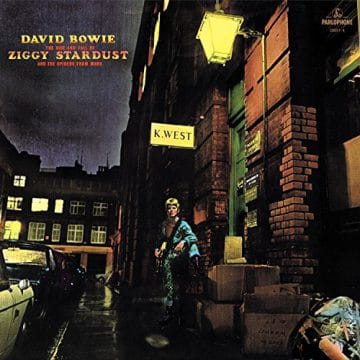 Review:
If you’re a fan of sleaze rock and happen to be middle age like myself, chances are you not only dig ’80s hard rock, but just about every glam and glitter act that influenced bands like Poison and Mötley Crüe like the Beatles and Rolling Stones that influenced them. Bands like Cheap Trick, KISS, The Sweet and T. Rex would go on to move the next generation of rockers to pick up instruments and eyeliner. Of those influential ’70s artists, few were as innovative as David Bowie.

Starting off as a pop artist before becoming an acoustic styled folkie (much like future fellow glitter legend Marc Bolan of T. Rex), Bowie would eventually create Ziggy Stardust, the first of many personas over his long career, and would drive this glam rock star alter ego through four albums over two years before making a slow move towards soul and the persona that would come to be known as the Thin White Duke. But in 1972, Bowie (and Ziggy) would explore androgyny blurring the lines of sexuality all the while providing a more literate side to the glitter / glam rock movement starting to rise out of the UK. This would become the largest UK collaboration of music and fashion culture since the British Invasion of the sixties.

Already riding a growing wave of fame via early UK hits “Space Oddity” and “Changes”, Bowie had already laid the groundwork for the spaced out rock & roller Ziggy Stardust. With the addition of backing band The Spiders from Mars, the time was ripe to unleash a new rock n’ roll hero on an unexpected teen audience looking for their own freedom to blur the lines. With Bowie, lightning bolts struck and rock n’ roll would never be the same again.

Recorded at Trident Studios in London, England, The Rise And Fall Of Ziggy Stardust And The Spiders From Mars would introduce themes that would influence the growing UK glam scene and feature future legendary tracks such as lead character theme “Ziggy Stardust”, sexy rocker “Suffragette City” and a song that would create one of Bowie’s nicknames –”Starman.” Through song, the story of Ziggy — a rock star messenger for beings from another planet — is told in sparkling theatrical fashion. This would pre-date Richard O’Brien’s original rock and roll tale of sexually-open minded beings from another world, The Rocky Horror Show, by nearly a year.

Starting off with bleak opening track “Five Years”, Ziggy let’s on that the world is short on time. Just five years to be exact. A few years later, Pink Floyd would achieve success with a similar brooding sound on “The Wall.” But as he would do often over his career, Bowie was ahead of his, or anyone else’s, time.

“Soul Love” adds a bit of the kind of groove Bowie would explore in just a couple of years before jumping straight back into the intergalactic glam sound of Ziggy and his Spiders on “Moonage Daydream.” While this tune flirts again within the realm of glitter rock, its lush are just enough to connect it to Bowie’s not so distant past. Next tune “Starman” takes an uplifting groove and features many of the “boogie” ingredients that would connect Bowie to the likes of Marc Bolan and Mott The Hoople.

“It Ain’t Easy” and “Lady Stardust” meld the rock n’ roll and musical theater sides of Bowie with the prior sounding very ’60s counterculture musical and the latter bordering on the edge of cabaret-ish. One would have to wonder if Richard O’ Brien, a British artist himself, might have been influenced by the music of Ziggy when creating Rocky Horror. Smartly, before Bowie lets Ziggy become too theater, he kicks up the guitar for “Star” and lets the rock n’ roll start to creep back in.

“Hang On to Yourself” is full on glitter / glam rock and lyrically introduces the Spiders From Mars. The rolling bass guitar and lead lines make perfect beds for the “come ons” to lay on. Outside of more well-known tracks to follow, this is maybe the coolest tune on the album.

Forty-five years later, the world knows that “Ziggy played guitar” but in 1972 he was only just about to hypnotize an entire generation of kids. To this day track, “Ziggy Stardust” is still amazing and still one of Bowie’s most covered songs by bar bands and famous artists alike. Through the years, I have continually experienced a love of musicians to perform this song, even those that are not fans of Bowie or the song. But while this semi-title track remains a top Bowie tune, “Suffragette City” stands as a favorite among fans of more rocking sounds. More up tempo in delivery and featuring a bit of dirty fun, it is maybe Bowie’s most rock sounding composition of his solo work. It could easily have been the perfect album closer but even so, “Rock N’ Roll Suicide” presents the perfect fall for Ziggy and in proper theatrical form, could have been the perfect score for a film version’s closing credits.

Perhaps fans will always debate just how rock n’ roll Bowie was. For 1972, Bowie and Ziggy were more rock n’ roll than most, blending many styles with a rebellious aura that spit at conventional rock stereotypes of the period making Bowie more like the careless punk rockers that would follow. While Bowie would be labeled a dinosaur by the likes of the Sex Pistols and The Clash, secretly he was loved and appreciated — the difference being that Bowie wasn’t afraid to share even the most ”uncool” of his musical loves in comparison to the “we don’t care what you think” punks who as we know now, really did care. It was this fearless knack to exist musically without walls that would make Bowie and his 1972 Ziggy Stardust masterpiece a huge influence on artists as diverse as Guns N Roses, Lady Gaga, Lou Reed, Madonna, Marilyn Manson, Mötley Crüe, Poison, Skid Row, and many more.

For a six-year-old, seeing and hearing Bowie for the first time would remain an experience of a lifetime. It was just one of many artists my uncle in Italy would turn me on to during visits and knowing that sometime during our time together, he would pull out his stack of records and crank up the turntable made the anticipation during the long trip from Germany nearly unbearable.

Thank goodness I had my boom box, headphones, and own pile of rock tapes!