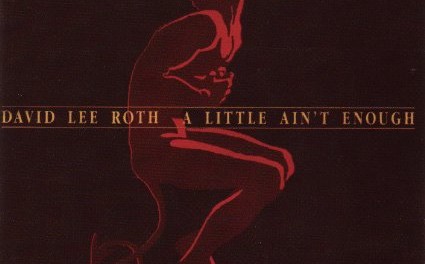 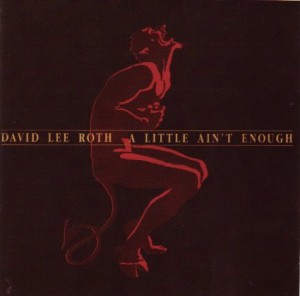 Review:
January 1991 marks the 25th anniversary of the release of David Lee Roth‘s third full-length studio album A Little Ain’t Enough so what better time than now to do a review of this mostly hit and miss album. Diamond Dave had a tough act to follow with A Little Ain’t Enough given his previous solo efforts, the stellar Eat ‘Em And Smile (1986) and the more commercial yet good Skyscraper (1988), and since he had parted ways with guitar virtuoso Steve Vai.

I remember how excited I was about Roth‘s new solo album upon hearing the first single “A Lil’ Ain’t Enough” which sounded like a mix of a classic Roth era Van Halen tune mixed in with the best solo material that Roth had come up with to date. If the rest of the songs on A Little Ain’t Enough could be nearly as good as the “A Lil’ Ain’t Enough” single, this could possibly be the best album featuring David Lee Roth whether with Van Halen or on his own as a solo artist. Unfortunately, one listen of A Little Ain’t Enough crushed all of my hopes in one swoop. There were really only a few great songs with a lot of filler or subpar tracks. This is one of the many CDs that was stolen from me almost twenty years ago which I never bothered replacing. Revisiting A Little Ain’t Enough at this time confirms that this was definitely not Roth‘s best solo effort but it wasn’t as bad overall as I thought it was in the past. A Little Ain’t Enough is actually a “decent” album.

Of note, the three best tracks on A Little Ain’t Enough — the brilliant “Sensible Shoes” which showed that Roth could possibly have a music career outside of rock n’ roll, “A Lil’ Ain’t Enough” and the Eat ‘Em And Smile era sounding “It’s Showtime” — are all included on Roth‘s greatest hits compilation The Best (1997) so if you have that latter album, you have the essential tracks. Nevertheless, there are some other good tracks on A Little Ain’t Enough such as “Last Call” and the peppy “Hammerhead Shark.” Upon revisiting the entire album twenty plus years later, it struck me that many of the weakest songs are just too busy with too much going on at the same time. Examples include the over indulgent “Shoot It” with its horn section and “40 Below” which seems ram packed full of ideas including many Roth yelps. Other weak tracks include the rather dull lounge like ballad “Tell The Truth.” A Little Ain’t Enough was also many people’s introduction, including mine, to hot shot guitarist Jason Becker who sadly was struck with Lou Gehrig’s Disease and five years later, that disease had ravaged him to the point that he could no longer speak. Despite being physically affected, Becker, to his credit, continues to release music to this day.

Overall, A Little Ain’t Enough, as far as I am concerned, began Roth‘s downhill slide which really continued until he finally reconnected and publicly reunited with the Van Halen brothers in 2007.