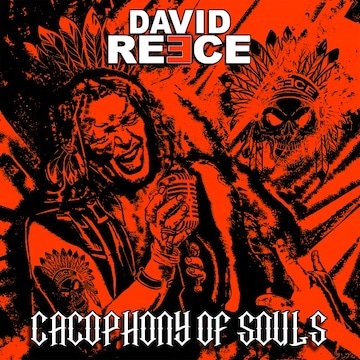 Review:
As a huge fan of the work David Reece has done with Accept, Bangalore Choir, Sircle of Silence and Bonfire, I was intrigued to hear what Reece would put forward in regard to his Reece project. What I get out of this, is a cohesive collection of in your face heavy metal compositions. Possibly, had Accept gone in this direction all those years ago when Reece took over as the band’s vocalist, their fortunes would have been slightly different.

What I take from this immediately is the razor like guitar riffing of former U.D.O. guitarist Andy Susemihl and of course the amazing vocals of Reece. There is something about his voice that captures me immediately. What I can always say about Reece is that no matter the heaviness of the song, there is always a good melody behind the vocal. He is the master of creating melodies that stick in your head. A song like “Judgement Day” really showcases that for me. Within this song, there is also a beautiful acoustic part that leads into a melodic yet heavy solo. The riffing underneath the vocal is very European sounding, but gives the song much depth. All things aside, this is as heavy as a song with that very title should be. When it’s all doom and gloom at the end, well frankly, I think it should be. I’d like to think that that day may never come, so for now let’s just listen to a song about that premise.

“Chasing The Sun” is perfect. It grabs you by the balls so suddenly that you’re falling to the floor in pain. As you finally regain your strength and the agony subsides, you say to yourself, “What the hell just happened? I feel violated, but I really enjoyed it!” “Collective Anesthesia” is a moody, slow paced song that feels dark and gloomy. Reece’s vocal approach really makes the song. It’s as if he is disgusted by the sheer topic of the song. “No Disguise” is a highlight for me, as the guitar sounds like it may have been on Accept’s Eat The Heat, but the chorus could have been on Bangalore Choir‘s On Target album. That says a lot to me as it makes me realize that possibly had this been a song done in the ’80s, the cookie-cutter melodic record producer would have buried those guitars into oblivion. What the times have done, whether it be good or bad, it has allowed the artist their music integrity. Without a big budget label breathing down your neck to produce a hit, the artist can give the fans what they truly want to hear. Who doesn’t love in-your-face, chainsaw buzzing, electric guitar?

The title track “Cacophony of Souls” again highlights the effectiveness of Reece’s voice. Reece’s lead vocal captures me quickly. It is sung in a lower register until the chorus where Reece belts it out. As I was listening, I made a quick comparison to Geoff Tate in spots. “A Perfect World” almost gives a feeling of the mid ’90s, when certain thrash bands became more musical using heavy guitar melody with the vocal. Susemihl’s melody guitar follows the vocal perfectly. Nothing is overshadowed by the other. The bass is high in the mix and drives the song throughout. As the mid-section of the song approaches, the bass attack is followed by melodic guitar lines that build up slowly. As the solo hits, the rhythm guitar drops out allowing the solo to be felt perfectly. I think it’s a brilliant way of attacking a song and really adds a certain depth. Sometimes music can be so contrived and stale. This really becomes an exciting listening experience.

“Another Light” really shows a softer side of Reece. We all know that David Reece is an amazing talent and when singing a ballad, his emotions come through. His voice is what drives the song, but with that said, Susemihl does his part and brings forth a slow, melodic solo that you could actually sing. Many guys may try to wank all over this song, but not here. This shows great talent, discipline and desire to do what is right for the song. “Bleed” sees Reece telling us that he indeed looked into a crystal ball. Possibly what he sees in that crystal ball is the fact that in 2020, he will release a really kick ass record with an amazing kick ass band. Regardless, this is another track that features a cool guitar groove with a driving chorus. The lyrics are clever as he uses ball in the first verse and follows it up in the second verse with wall. For those that are aspiring musicians, this is a formula that has been used for many decades.

As we move along, what you will notice is that instead of following the track listing, I’ve put the album on shuffle. By doing this, I am pushing myself to give a different view than the album is intended. So kids, as you go to the bottom and say, “Hey, that mofo didn’t do the tracks in the right order! Who does he think he is?” I’m keeping you on our toes!

“Over And Over”, clarifies that the world can sometimes be a deceitful place. “Over and over, here we go again. Listening to fools advice trying to pretend”. How true is that statement? Geez, I’m having déjà vu of past experiences. “Metal Voice” I came to find was written for a Canadian metal podcast called The Metal Voice. This is an all-out assault on the senses. This song hits you right between the legs like a 10 ton object of destruction. It’s like a nuclear bomb went off in my headphones. What strikes me is how the fast, staccato guitar notes follow the percussion in the guitar solo. Ear candy my friends!

“Back In The Days” is possibly the closest song to what could be termed as ’80s melodic hard rock. The guitar is just not in your face as much. The guitar is almost more compressed to everything else on the album. The honest truth though is that I don’t think this song would work as well had the guitars been in your face. Sometimes you need to bend the rules a little bit. Who wants an album without depth? At 45 years old, I need stimulation. I need to feel like I have been challenged. Even the guitar solo is different. It appears that this is the Swedish approach with the neck pick-up being turned on allowing the notes to be heard more predominantly and the tone sounding thinner. “Blood On Our Hands” could possibly be on Judas Priest’s Painkiller album. The guitar rings out the chords as Reece sings. On the chorus, the guitar is playing a choppy progression. A nice ending to my experience on shuffle of course.

Overall, holy shit! David Reece, I don’t know how you’ve done it, but this may be the best thing you have ever done. I am truly impressed with the melody, the aggression, the musicianship and the overall sound quality. Well done…