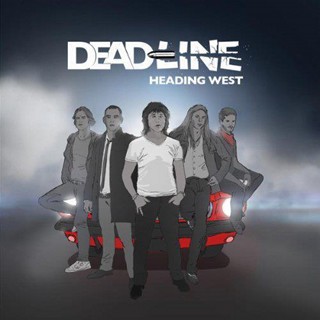 Review:
Deadline is an interesting new band that has taken a few different approaches on their debut EP — almost as if they are putting out feelers to see which sound suits them best. For that reason Heading West is a disjointed affair — occasionally showing promise and sometimes being downright frustrating.

As for which delivery these French upstarts should stick with, for me it’s a toss-up between the sleazy opener “Dance With Style” and the Led Zeppelin influenced “Heading West”. “Dance With Style” is the EP’s high-energy offering, a song that is carried by impressive crunchy guitar work that could rival countrymates Aesthesia, while “Heading West” reminds me of classic Kingdom Come with its moody and retro feel. On these two tracks singer Arnaud Restoueix reveals a fairly unique vocal delivery that has a certain nasal quality to it — somewhere between Axl Rose and Salty Dog‘s Jimmi Bleacher — and one that can be hard to digest. As for the closing six-minute plus ‘epic’ “Another Way To Live”… I’ll be kind and pretend it doesn’t exist.

Meat Loaf used to say, “don’t be sad, ’cause two out of three ain’t bad”, and that certainly applies to Deadline‘s Beau Hill mixed debut effort. There is obviously some work to do in order to streamline the band’s sound and determine what path they want to take, but the building blocks are in place — although I’m not sure how many people will accept Restoueix‘ accent thick vocals… then again that didn’t hamper Axl Rose‘s career did it?